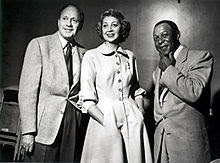 (143 Episodes) Update: ** Episode information added to all uploads prior to Jan 05, 2011 JACK BENNY (Feb 14, 1894 – Dec 26, 1974): Jack Benny, born Benjamin Kubelsky, was an American comedian, vaudevillian, radio, television, and film actor. Widely recognized as one of the leading American entertainers of the 20th century, Benny played the role of the comic penny-pinching miser, insisting on remaining 39 years old on stage despite his actual age, and often (although an accomplished violinist) playing the violin - poorly! Benny was known for his comic timing and ability to get laughs with either a pregnant pause or a single expression, such as his signature wave of the hand with an exasperated "Well!" His radio & television programs, tremendously popular from the 1930s to the 1960s, were a foundational influence on the situation comedy genre. Dean Martin, on the celebrity roast for Johnny Carson in November 1973, introduced Benny as "the Satchel Paige of the world of comedy." * PROGRAM HISTORY: Benny had been only a minor vaudeville performer, but he became a national figure with The Jack Benny Program, a weekly radio show which ran from 1932 to 1948 on NBC and from 1949 to 1955 on CBS. It was consistently among the most highly rated programs during most of that run. * SPONSORS: With Canada Dry Ginger Ale as a sponsor, Benny came to radio on The Canada Dry Program, beginning May 2, 1932, on the NBC Blue Network and continuing there for six months until October 26, moving the show to CBS on October 30. With Ted Weems leading the band, Benny stayed on CBS until January 26, 1933. Arriving at NBC on March 17, Benny did The Chevrolet Program until April 1, 1934. He continued with sponsor General Tire through the end of the season. In October, 1934, General Foods, the makers of Jell-O and Grape-Nuts, became the sponsor most identified with Jack, for the next ten years. American Tobacco's Lucky Strike was his longest-lasting radio sponsor, from October 1944, through the end of his original radio series. The show returned to CBS on January 2, 1949, as part of CBS president William S. Paley's notorious "raid" of NBC talent in 1948–49. There it stayed for the remainder of its radio run, which ended on May 22, 1955. CBS aired repeats of old radio episodes from 1956 to 1958 as The Best of Benny. The primary name of the show tied to the sponsor. Benny's first sponsor was Canada Dry Ginger Ale from 1932 to 1933. Benny's sponsors included Chevrolet from 1933 to 1934, General Tire in 1934, and Jell-O from 1934 to 1942. The Jell-O Program Starring Jack Benny was so successful in selling Jell-O, in fact, that General Foods could not manufacture it fast enough when sugar shortages arose in the early years of World War II, and the company had to stop advertising the popular dessert mix. General Foods switched the Benny program from Jell-O to Grape-Nuts from 1942 to 1944, and it became, naturally, The Grape Nuts Program Starring Jack Benny. Benny's longest-running sponsor, however, was the American Tobacco Company's Lucky Strike cigarettes, from 1944 to 1955, and it was during Lucky Strike's sponsorship that the show became, at last, The Jack Benny Program once and for all (although it was often announced by Don Wilson at the start of the show as The Lucky Strike Program Starring Jack Benny). * SITUATIONS: The Jack Benny Program evolved from a variety show blending sketch comedy and musical interludes into the situation comedy form we know even now, crafting particular situations and scenarios from the fictionalization of Benny the radio star. Any situation from hosting a party to income tax time to a night on the town was good for a Benny show, and somehow the writers and star would find the right ways and places to insert musical interludes from Phil Harris and Dennis Day. With Day, invariably, it would be a brief sketch that ended with Benny ordering Day to sing the song he planned to do on that week's show. One extremely popular scenario that became an annual tradition on The Jack Benny Program was the "Christmas Shopping" episode, in which Benny would head to a local department store. Each year, Benny would buy a ridiculously cheap Christmas gift for Don Wilson from a store clerk, played by Mel Blanc. Benny would then have 2nd, 3rd, even 4th thoughts about his gift choice. This drove Blanc (or, in two other cases, his wife and his psychiatrist, as well) to hilarious insanity when he exchanged the gift, pestered about the Christmas card or wrapping paper countless times throughout the episode. As a result, in many cases, the clerk would commit suicide, or attempt & fail to commit suicide ("Look what you done! You made me so nervous, I missed!"). In the 1946 Christmas episode, for example, Benny buys shoelaces for Don, and then is unable to make up his mind whether to give Wilson shoelaces with plastic tips or shoelaces with metal tips. After Benny exchanges the shoelaces repeatedly, Mel Blanc is heard screaming insanely, "Plastic tips! Metal tips! I can't stand it anymore!" A variation in 1948 concerned Benny buying an expensive wallet for Don, but repeatedly changing the greeting card inserted—prompting Blanc to shout: "I haven't run into anyone like you in 20 years! Oh, why did the governor have to give me that pardon!?" Benny realizes that he should have gotten Don a wallet for $1.98, whereupon the put-upon clerk immediately responds by committing suicide. Over the years, in these Christmas episodes, Benny bought and repeatedly exchanged cuff links, golf tees, a box of dates, a paint set, and even a gopher trap. * THEME MUSIC: During his early radio shows, Benny adopted a medley of "Yankee Doodle Dandy" and "Love in Bloom" as his theme music, opening every show. The strange interpolation of "Yankee Doodle Dandy" seems to have been an inside joke at Benny's expense. Jack Warner of Warner Brothers had once promised to cast Jack Benny as George M. Cohan in the film Yankee Doodle Dandy (which of course didn't happen, although Warner did cast Benny in The Meanest Man in the World, based on a Cohan play). * SOURCE: Wikipedia OTR * def gp ddh

JB Who is the Best Comedian - Benny or Allen

"Some kind of Einstein?" Nope. Just good talent and timing. He didn't write this stuff you know. He paid other people to do that. Pay a visit to Google.com to meet the Einsteins: https://sites.google.com/site/jackbennyinthe1940s/Home/the-writers-1940-1949 Like Bob Hope, Jack could SELL a joke (tell it with perfect timing) and make people laugh. (Bob used writers too. So did Fred Allen and the rest of the great radio comics. They all knew how to pick out the BEST jokes from among those the writers came up with for each show. As did Johnny Carson later on. I love them all but I do not confuse telling jokes with writing those jokes. And neither should you.

The voices of "The Jack Benny Program"

Hello, Merlin; I believe I've found the episode that you're looking for. The name of the episode, from October 28, 1945, is 'JB 1945-10-28 Jack gets held up - the $85,000 bet'. Go to this page, and play #398 in the player (you may have to copy and paste this link into your address bar): https://archive.org/details/JackBenny_HQ_601 The hold-up was turned into a running gag, as were many of his bits that went over well, with Jack going as far as hiring Joe Louis as a bodyguard. The hold-up story was used in this episode and several that followed, up to and including the November 25th episode, with guest Cass Daley. All of these episodes are on the page at the link above. If you're a Jack Benny fan, you'll be in hog heaven when you see that page: 810 episodes, all very good quality mp3s. One warning, if you want to download and save all of the episodes on the HQ page, it's 17.9 Gigabytes! ----------------------------------- If I can recommend a couple more 'must-hear' episodes, they would be two from January 1947. Both are available on this page (#112 and #113 in the player) as well as at the page linked above (#443 and #445 in the player there). The first has guests Humphrey Bogart and Lauren Bacall, with Jack trying to portray a lady's man. (Bogart's "run your fingers through his hair" gag is a gem.) This one also features Bogie and Bacall engaging in what must be, judging from the audience's reaction, the hottest kiss in radio history. The second has Boris Karloff as guest, and is a special treat for fans of Inner Sanctum. Karloff was a Sanctum regular, and here he gets to do a light-hearted send-up of his radio persona. All of the earmarks of Inner Sanctum are there, carried to ridiculous extremes: the famous organ spikes, the protagonist being motivated by greed, and his ironic comeuppance at the conclusion, in that his greed causes him to end up penniless. Warning: this radio show contains full frontal nudity! P.S. Thanks for all your great uploads, DEF GP (if that really is your name).

Date in one of the episodes is incorrect

The episode labeled: JB 1945-03-11 How Jack Found Rochester is incorrect. This episode originally aired on 12-3-1950. Several big clues: (1) Don Wilson mentions Jack's first appearance on TV, which took place in 1950; they also mention Milton Berle; (2) Phil Harris refers to the upcoming Christmas holiday; (3) Mary Livingston mentions that this is Benny's 19th year in radio; (4) Benny mentions that Rochester will have been with him 14 years in March; Eddie Anderson first appearance on The Jack Benny Program was on March 28, 1937 (5) The Sportsmen's Quartet appear. They were not on the show until 1950.

He was a talented comedian in his own right, but Benny's greatness rested on the fact that he was not afraid to surround himself with a top notch cast that got plenty of laughs at his expense. Episode 122(broadcast of 04/04/1948)erroneously identifies the borrowed Oscar as belonging to Bing Crosby. It was Ronald Colman's Oscar. In real life the Colmans apparently were Benny's neighbors who lived just a few blocks away, and they were guests on close to two dozen of Benny's shows, all of which were very funny.

I love Jack Benny's radio programs. I have been listening to them every day since 2005, either at work or before I go to bed to wind down. He has really funny gags that appeal to my sense of humor. One of them was something like "the restaurant was out of hot chocolate, so they gave me a Hershey bar and a match!" I love short somewhat silly jokes like that, and Jack has a lot of them. His writers were the best!

Gotta be one of the best comedians of the 20th century. One reason was, he always let his co-stars get the best laughs at his expense. Simple Dennis Day, always got the better of him, even though his character appeared to be totally clueless. The running gag of Jack's cheapness is really funny. He'd do things like have friends over and offer food, then charge them for it. Then they'd complain he'd raised the price from the last time they were there.

The Jack Benny Program has to be one of my favorite things to listen to. It puts you back in those days and what it would've been like. It will always put you in a great mood. I listen to this every night while I go to bed. And to top it off, I eynjoy some Jello with it :). "With our 6 delicious flavors" Thank you so much for this