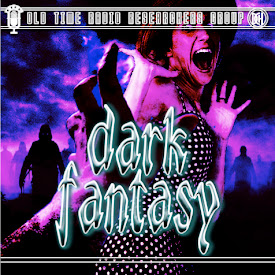 Dark Fantasy was a short series with tales of the weird, adventures of the supernatural, created for you by Scott Bishop. The series aired as a horror drama on NBC between 1941 and 1942. Dark Fantasy was a series dedicated to dealings with the unknown. Originating from radio station WKY, Oklahoma City, it was written by Scott Bishop (of Mysterious Traveler and The Sealed Book fame) and was heard Fridays over stations. Tom Paxton served as announcer. The shows covered horror, science fiction and murder mysteries. Although a short series, the shows are excellent with some stories way ahead of their time. The following is a news promo promoting the show: Every since Lights Out went out several years ago, fans of the fiendish have been clamoring for more good old goose-pimple horror drama on the air. Now they have it. One of the programs that currently freezes the airwaves with its chilling stories is Dark Fantasy comparatively new to the networks. In the late hours of Friday nights these shivery, shocking stories go out over NBC - right straight from Oklahoma City, which you might not have thought of as headquarters for haunts. Station WKY is the home of the Dark Fantasy plays, and the writer is Scott Bishop, who lives in the midst of mystery and the supernatural, represented by the innurnerable volumes of thriller fiction, fantasy lore and all kinds of horror literature that fill his home andhis office. Bishop has long contributed to network broadcasting and to magazines. He says, "Give the listener enough material to let his imagination go to work, and he'll supply his own goose-pimples." Dark Fantasy has been furnishing plenty of such material since last November. And judging from enthusiastic comment, the horror fans are responding with goose-pimples galore! Tune in every Friday on Station WKY Oklahoma City.

From the Old Time Radio Researcher's Group. See "Note" Section below for more information on the OTRR.

A Toast To The Radio Auteurs

I write here as a professional author who works mainly in the field of audio drama (yes, it's still an ongoing popular, LIVING medium, here in the UK certainly), for the likes of BBC radio, Big Finish (their new Lovecraftian Doctor Who, Lurkers At Sunlight's Edge) and most recently "Blood & Stone" for 3Dhorrorfi. And I just want to put on record how much these great auteurs of 40s horror drama such as Scott Bishop and Arch Oboler mean to me, how much they continue to inspire me: other horror writers can have Stephen King et al for their role models; these guys are mine and I'm so grateful to the Archive for making their work available (I only recently became a member, but I've been listening for over a year now). The important thing is that they and their work aren't just relics of a bygone age, of only nostalgia value in the modern world, but the instigators of an ONGOING tradition. As one small contributor to that tradition's continuing, I salute these guys, wherever they may be.

I love it from the first listen..I do wish there were more episodes..I do love the sounds in the background it adds to the stories..Great readers as well..

At the Top... Dark Fantasy!

Top honors must be given to Scott Bishop's fine series, Dark Fantasy. This is one of the finest series ever aired in the horror genre. As is the case WITH ALL RADIO SERIES, some shows are better than others... Mr Bishop had the ability to craft shows week after week, of the highest caliber... Few if any, could be labeled mediocre. Unless someone has been in a situation, where they have had to come up with new material EVERY WEEK, it is difficult to appreciate the genius of Mr Bishop's solo work. Mr Bishop's series demonstrates his inclusion into an elite class of writers and producers that would have to include such notables as Arch Oboler and Orson Welles. Many of Mr Bishop's plays could air in 2010, and there wouldn't be a clue that it wasn't contemporary, let alone give hints to the fact that this body of work is nearly SEVENTY YEARS OF AGE! The writing and production of Dark Fantasy has few equals. Many thanks to Mr Prelinger and the Old Time Radio Researchers' Group for making so many fine programs available!

I thoroughly enjoyed listening to each of these stories! They were all very well voiced. I loved having them in the background while working on artwork.

while today the radio story-telling can be found only in some radio station which are highly naive or highly experimental, the OTR project is a living proof to the its' golden age. oh, of course that a lot of these episodes have a not-so-subliminal moral, but here the fact that once radio was considered widely as a mind provoking thing and done in exellent quality is what's important. dark fantasy is a great example for what non-muxical radio programs should be like. thank you for it.

I give. Does anyone know? Actually, never mind. I seem to have an allergy to whining on librovox. What I love is when reviewers recommend a chapter or story. How about yours ? I liked

Scott Bishop, who was a well-known and wildly popular mystery writer back in the day (Hell, you could hardly pick up a copy of BLACK MASK, MICHAEL SHAYNE, ALFRED HITCHCOCK, or ELLERY QUEEN'S MYSTERY MAGAZINE without running across a story by him. The cast includes Ben Morris(who also took over the role of "Pat Novak" in PAT NOVAK FOR HIRE from Jack Webb) was in THOUSANDS of old time radio programs "BROADWAY IS MY BEAT also comes to mind. The rest of the in-house cast, including the lovely and talented Eleanor Naylor Caughron (whose last name has been mis-spelled in just about EVERY possible way) Fred Wayne, Tom Paxton, Garland Moss, and Murillo Scofield are usually pretty damn good. The cry of "Cliche" is ridiculous when aimed at any of these old shows. IF YOU WERE WRITING A STORY TODAY AND USED THESE THE CRITICISM MIGHT BE VALID But cliches only BECOME cliches because they work so well and a lot of them originated with THIS show. To be a fan of OTR (like being a fan of old horror films) the FIRST TRICK is to try to put yourself in the place of a listener or viewer BACK THEN. You haven't encountered these plot devices before so they aren't CLICHES to YOU. They scare the HELL out of you. Especially when you listen to them late at night (well, after 10 PM) like the audiences were back then...with the lights out and your eyes shut to help you VISUALIZE what's happening. If you can't contribute YOUR part to this "Theater of the Imagination"---if, in other words, you have no imagination...then go watch some piece of crap CGI movie down at the local theater. And, right at the end, when the Monster you thought was dead, suddenly does a "Carrie" on you and leaps up again...remember where you met that cliche first. And it wasn't in CARRIE...it was in those old movies and old time radio...and, most especially, it was in the Realm that is DARK FANTASY

Excellent archive of old radio horror. The writing is everything you could hope: dreadful, predictable and ridiculous. I love this kind of campy OTR. Thank you! Unfortunately it is missing the end of the last episode.