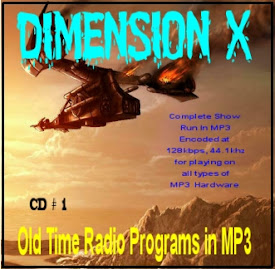 Dimension X was first heard on NBC April 8, 1950, and ran until September 29, 1951. Strange that so little good science fiction came out of radio; they seem ideally compatible, both relying heavily on imagination. Some fine isolated science fiction stories were developed on the great anthology shows, Suspense and Escape. But until the premiere of Dimension X -- a full two decades after network radio was established -- there were no major science fiction series of broad appeal to adults. This show dramatized the work of such young writers as Ray Bradbury, Robert (Psycho) Bloch, Robert Heinlein, Isaac Asimov, and Kurt Vonnegut. In-house script writer was Ernest Kinoy, who adapted the master works and contributed occasional storied of his own. Dimension X was a very effective demonstration of what could be done with science fiction on the air. It came so late that nobody cared, but some of the stories stand as classics of the medium. Bradbury's "Mars Is Heaven" is as gripping today as when first heard. His "Martian Chronicles" was one of the series' most impressive offerings. Dimension X played heavily on an "adventures in time and space, told in future tense" theme. Actors who worked regularly on the show included Joe Di Santis, Wendell Holmes, Santos Ortega, Joseph Julian, Jan Miner, Roger De Koven, John Gibson, Ralph Bell, John Larkin, Les Damon, and Mason Adams. It was directed by Fred Weihe and Edward King. The deep-voiced narrator was Norman Rose. The series played heavily on the "X" factor in the title, as did X Minus One a few years later. The signature was boomed out of and echo chamber as "DIMENSION X X X X X x x x x x . . . " From the Old Time Radio Researcher's Group. See "Note" Section below for more information on the OTRR.

A bit of every thing from the early days.

A collection of early science fiction mostly from the 1950's. a very good listen.

just this guy you know...

I cannot discern episodes as there are multiple / repeat titles. could this just be an issue because I am using an Android phone? really enjoy the old school production!

I admit that I don't have all of these episodes, but it's funny when you stop to think about it, that the producers of this 1950's radio program considered that "future tense" (at least in some of the episodes that I have) only extended as far ahead as the 1990's (this is 2010), and many of them have some sort of apocalyptic-gloom-and-doom ending as their theme, none of which, of course, has happened in real life. Having said that, it sounds sort of like all this talk about "global warming", although I don't claim to be a science expert.

Loved it down loaded half of them at the Library and rusged back the next day to get the rest. I must up load “Journey into Space” also from the 50's and at 20 episodes per story it seems to happen in real time in “The Red Planet” they get to Mars until episode 10! As Dim X is a weekly show how come Wheaty's Week lasts for three episodes? Listening to them one after another it felt like the Wheaty people where trying to take over my mind – eat them at 7, still spewing at 11.

Now we know where William Shattner got his Captain Kirk voice from and other treasured characters' sources. The Wheaties commercials are even cute. Turn down your volume before pressing PLAY, it's loud. The sound effects and orchestration are excellent, not to mention the writing from some of the giants of science fiction. Read by great actors of the day, this is an excellent set of professional radio shows with dozens of half hour long shows from the 1940s and 1950s. Gotta go, need some Wheaties.

@ 23:00 on #12 and at the beginning of #13 you can hear a news broadcast cut away as America enters the Korean war 50-06-24 and 50-07-01. That's pretty thrilling. In the middle of tales about atomics and ro-bits and missions to the moon. I love listening to these tales. Some of them are really stark.

So far I've gotten through about half the episodes, and I can safely say that this is an excellent series. I specially like episode 13. It's an almost perfect prediction of the internet and modern computers. On an interesting side note: episode 12 and 13 are interrupted by a news bulletin about the start of the Korean war.