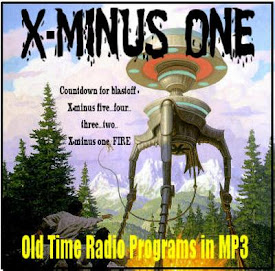 X Minus One - Single Episodes

X Minus One aired on NBC from 24 April 55 until 9 January 58 for a total of 124 episodes with one pilot or audition story. There was a revival of the series in 1973 when radio was attempting to bring back radio drama and it lasted until 1975. The show occupied numerous time slots through out its run in the 50's and thus was never able to generate a large following.

X Minus One was an extension of Dimension X which aired on NBC from 1950-51. The first fifteen scripts used for X Minus One were scripts used in the airing of Dimension X; however, it soon found its own little niche. The stories for the show came from two of the most popular science fiction magazines at the time; Astounding and Galaxy. Adaptations of these stories were performed by Ernest Kinoy and George Lefferts. They even wrote a few original stories of their own. The writers of the magazine stories were not well known then but now are the giants of today. These stories came from the minds of Ray Bradbury, Isaac Asimov, and Poul Anderson to name a few.

This series has survived from its original airing in high quality to be enjoyed today.

More good stuff from the airwaves of yesteryear

I just wanted to say yesteryear, thanks. Seriously, DR. GRIMSHAW was great. I think that must be the earliest work of Alvin and the Chipmunks. Oh dear you must hear the ending! Meoww! Hard to believe these are from the 50s; they sound as modern as Nightfall and vanishing point (almost). THE GREEN HILLS OF EARTH is interesting of course, being often anthologized. But the singing in it sounds so 70s you can't believe it.

Episode 38 Skulking Permit is worth the 5 stars just on its own – if you just listen to one episode make it that one. I could see the ending coming a mile off and it didn't arrive instead it proved to be even more subversive than I thought it was going to be well done Robert Sheckley – won't give the ending away here. Episode 36 Cave of Night was the first one I listened to as I had already heard all of Dimension X. This was whilst walking home through town and Earth signeled the space ship I started to cry – got even more funny looks than usual. So far I'm only up to episode 50, I hope there is at least another episode as good as #38

I'm watching Twilight Zone on TV and listening to dr. Grimshaw's sanitairium on my smartphone. .. I prefer the latter. it is great!

Only Second To Reading A Sci-Fi Book!

These X Minus One series are just gems that need to be treasured for future generations. In this era of CGI and other computer manipulated images, the simple telling of science fiction tales through just the audio mode is still thrilling and effective. The imaginative juices are just kicked to jumpstart and go places where no joysticks on the video control panels have gone before. Like I said in the title, the only things that beat these radio shows, in terms of thrilling imaginations, are the science fiction books that I had read over the years.

I was 5 years old when this radio show went off the air. It was truely brilliant and the precursor to TV shows like "The Twlight Zone", "The Outer Limits", and “Star Trek”. I thank you for re-opening the best 3-D experience possible. The theater of the mind!

The only reason for the half star is because some stories are repeated. Otherwise great stuff was still wanting more when it ended!

brilliant I loved every story back to real scifi

Spending the past several months in NASA Technical and Training servers reading abstracts around advanced propulsion has me beginning to question if in some ways parts of this might be truer than the books jaundra might imply. Could there actually be... might we in reality have a Black or Dark Fleet..? https://drive.google.com/open?id=1g7DlsthMsDbpgLWG3pM2VDvD7vepK31L It's all quite suggestive, perhaps some say the original authors may have been individuals possessing "psychic" competencies as their understanding of resonant frequency emergent field structure capacities of one's cognizant consciousness. Think I'll listen to all of X Minus One this rainy Saturday... and Dimension X will follow whilst continuing my research, perhaps acquiring some inspiration from more of this so brilliantly articulated and sentiently authored work. Additionally, allow me to note the sound effects are quite immersive lending themselves well to the storyline... Remembering before, how humanity perceived with their minds and there were no screens flashing imagery that so incessantly programed societal behavior visually and concepts were so well conveyed over an auditory spectrum we merely detect but a fraction of with our ears, yet is still only another form of electromagnetic wave propagation.