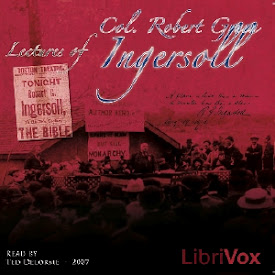 Colonel Robert Green Ingersoll was a Civil War veteran, American political leader and orator during the Golden Age of Freethought, noted for his defense of atheism. This book is the first of two volumes collecting Ingersoll's speeches. (14 hr 8 min)

Freedom From All Religion ...Now!

"Humans must have a distinction of what we can know and what we must believe" ~David Hume "When it comes to a god all we're left with is a kind of leap of faith, which leaves reason and knowledge behind." ~David Hume R.G. Ingersoll and Christopher Hitchens are primarily responsible for helping me to stand up, head held high and proclaim my independence from the intuitive zombie-like behavior I was taught as a child and believed as a young man, I put away those childish things you could say. It is amazing how much I Did Not know about religion and by researching, not just the anti-theist view but theology, eschatology, ecclesiastics, etc... I found myself at a point of anger and frustration that most of what is in the bible (New/Old Test.)was never mentioned or taught to us growing up in a catholic family and going to catholic school until the 8th grade. What of those who know the bible inside/out, can they be so deceived? This god of the bible is not a merciful/loving god, he's some sort of twisted nefarious tyrant with "folded arms"(Hitchens) and what's more; Does Not ...exsist. We cannot but choose otherwise because science continues to tell us so. Use the analytical and tell yourself the Truth! It becomes very clear once you begin to chip away at the text.

arguably the best reader on librivox! BRAVO! He breathes life into ingersoll's lectures, effectively transporting one to the grand age of enlightenment. A must listen for anyone interested in the brilliance of rational thought and critical thinking.

This narration is not only consisting of material that is infinitely interesting but Ted Delorme makes it enjoyable to the point where it can be listened to many times over without ever getting bored. He does such a good job of putting passion and inflection into the reading of Colonel Ingersoll, that after listening to this many times over, I'm CONVINCED that I am hearing an actual recording of the man himself. I'm instantly transported to the late 1800's by his voice and my imagination creates the rest. I can't imagine someone doing a better job. Wow. just spectacular, Ted. I can't thank you enough for your efforts. This is by far my favorite AND most listened to item on Internet Archive PERIOD, and that's to Mr. Delorme's credit. ..... And that includes my beloved Grateful Dead.

The Way Ingersoll Was Meant To Be Heard!

Robert Green Ingersoll was an electrifying orator, and his works were meant to be heard. In his day, no other human being had been seen and heard by more Americans - or would be until the advent of motion pictures, radio, and television. After hearing Ingersoll speak, Samuel Clemens wrote: "What an organ is human speech when it is employed by a master!" Ted Delorme doesn't simply read Ingersoll's speeches, but he masterfully performs them. Ted brings Ingersoll's assertiveness and wit to life in these nicely produced recordings. Listening to Ted Delorme's performance, it easy to understand why Robert Ingersoll was beloved by so many of his contemporaries such as Samuel Clemens, Walt Whitman, Ulysses S. Grant, Andrew Carnegie, Thomas Edison, and President James Garfield. Between 1865 and 1899, Ingersoll crisscrossed America on more than a dozen speaking tours. He packed the largest theaters of the day at the then-substantial admission of $1 apiece. Thanks to LibriVox and Ted Delorme, everyone can now hear and experience the speeches of Robert Ingersoll without a time machine and a ticket.

“The god of the Bible isn’t a merciful god…” Ever tried reading the bible, good sir? “The passages can be chipped away easily…” Have you ever tried maybe interpreting them the right way? For example, when Abraham is going to sacrifice Isaac, that was a test of faith. God tested Abraham’s and Isaac’s faith, He did not intend for Isaac to die. God is a merciful god, which is why chances to reconcile us from our sins are available. There are more glaring faults of the book that I could easily point out, but shan’t, if I did, you would never read this review to its conclusion, as it’d be about 100 lines long! It is alright if you disagree with me, I am just giving you my honest opinion as a Catholic. Thank you, and please don’t kill me!

Timeless wisdom that is also fun to listen to!

While Ingersoll's lectures are filled with thought-provoking ideas and impeccable logic, they also reveal his intoxicating sense of humour, which is only enhanced by Ted's charismatic reading of the text. If you harbour doubts about the religion that you have been taught to blindly accept; if you have difficulty reconciling the contradiction that an all-merciful god would sentence his children to eternal fire for expressing such doubts, then Ingersoll's lectures will enable you to rid your mind of these superstitions... And you will have a chuckle or two along the way! By the way, you are welcome to join the "Robert Ingersoll fan club" on facebook: http://www.facebook.com/group.php?gid=2366542207

Robert Ingersoll is an Icon on the level of Thomas Paine or Voltaire. His essays are logically unimpeachable and concisely describe the stupidity and hypocrisy Christianity inflicts on a nation that was founded on secular values. This should be required reading in the study of World History, Western History, American History, Civics, Government, Political Science, Sociology, Philosophy, and Religion. What's most amazing is how completely modern and relevant it is in the year 2018, though written in the 1800's. Robert Ingersoll was eloquent, bold and unwavering, yet clearly a passionately kind and loving human being.

This is a series of extremely well-argued lectures especially questioning the origins and justification for gods and religion. Laden with irony and wit, Ingersoll makes the case that a rational outlook cannot be reconciled with a dogmatic (religious) mind. Given that examining religion has become such a hot topic ("The End of Faith", "The God Delusion"), I found it fascinating to hear Ingersoll's arguments. He challenges the listener, even as he entertains. As public lectures, these definitely benefit from being heard rather than read, and the reader does an excellent job at presenting them with this in mind.