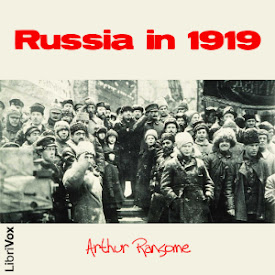 PUBLISHER'S NOTE: On August 27, 1914, in London, I made this note in a memorandum book: "Met Arthur Ransome at_____'s; discussed a book on the Russian's relation to the war in the light of psychological background--folklore." The book was not written but the idea that instinctively came to him pervades his every utterance on things Russian. The versatile man who commands more than respect as the biographer of Poe and Wilde; as the (translator of and commentator on Remy de Gourmont; as a folklorist, has shown himself to be consecrated to the truth. The document that Mr. Ransome hurried out of Russia in the early days of the Soviet government (printed in the New Republic and then widely circulated as a pamphlet), was the first notable appeal from a non-Russian to the American people for fair play in a crisis understood then even less than now. The British Who's Who--that Almanach de Gotha of people who do things or choose their parents wisely--tells us that Mr. Ransome's recreations are "walking, smoking, fairy stories." It is, perhaps, his intimacy with the last named that enables him to distinguish between myth and fact and that makes his activity as an observer and recorder so valuable in a day of bewilderment and betrayal. - Summary by B. W. Huebsch (4 hr 15 min)

The Executive Committee on the Reply to the Prinkipo Proposal

Kamenev and the Moscow Soviet

A Theorist of Revolution

An Evening At the Opera

The Committee of State Constructions

The Executive Committee & the Terror

Notes of Conversations With Lenin

The Supreme Council of Public Economy

The Race With Ruin

A Play of Chekhov

Modification in the Agrarian Programme

The Proposed Delegation From Berne

The Executive Committee on the Rival Parties

A Bolshevik Fellow of the Royal Society

A very positive account of the Bolsheviks, probably written to ensure continued access to Bolshevik leaders. Lots of interesting details , fortunately in short chapters so one does not get bogged down. Clearly read by Expatriate. Worth the quick read if you are interested in this period of history.

I've been wanting to learn more about the history of the Russian revolution, and what better way than with a first hand account as an outsider journalist. I loved it, each chapter ended sooner than I wanted

fantastic insight into the Russia of the time. amazing access to some of the key architects or conspirators if you will all of the revolution

Well read, and a fascinating look at post-Revolution Russia.