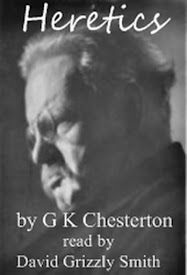 "Heretics," a series of essays by Gilbert Keith Chesterton. First published in 1905.

He wrote prolifically. He wrote humor. He wrote mystery novels, the Father Brown mysteries in particular. But he also wrote his opinions, his religious opinions and his opinions about religion.

"Heretics" is a book about religion and politics, theory and fact, morals and efficiency. What I most admire about "Heretics," written a bit over a century ago, is that his arguments are exceptional, and that so many of them are still quite recognizably true. He argues that the weakening and devaluing of religion has also weakened and devalued heresy. He argues that people should be able to speak freely -- but that freedom of speech has actually decreased people's willingness to speak about important issues. And so much more.

The one disclaimer I feel I must offer is that this book was "timely." Some of the people and events he mentions will be familiar. Many other people and events would have been familiar to you, if you'd lived in England at the beginning of the last century. The ideas he opposes, however, are either regaining popularity, or have never lost it. And his arguments are as valid and wise now as they were.

In some ways, he was ahead of his time. You may disagree with him, but you can't deny his intelligence and wisdom. This isn't the book you might expect it to be. I think you'll enjoy it, and maybe even learn something. Even if you disagree.

I admit this book is a little out of the ordinary for my usual selection of books. But I just couldn't resist the quality and intelligence of the writing. If you like this one, I have two other Chesterton books I'm planning on recording. Those will probably come after a ...

Chesterton's brilliant analysis of popular but fickle handlings of truth (and the impossible ends to which they lead) is just as fresh and applicable to the present conundrums created by postmodernity and post-postmodernity. beautifully read by someone not only with a command of diction and vocal intonation, but an enlivening sense of communication for the subject in hand!

Finally got the Promo finished for the book. I like the way it turned out. Not terribly impressive, but I think it successfully conveys what the book is like. If you're a podcaster, I hope you'll grab a copy and play it for me. I'll do my best to return ...

Thank you for your kind comment! Someday half of Europe could be speaking English sounding just like me -- except, hopefully, the younger women. ^_^ It was enjoyable to record, something of a new experiment for me at the time. Several other Chesterton books are here, and another is being ...

As a non-native speaker of English i was afraid listening would be harder than reading. But it is not. Thank you! Wonderfully done! AC

By: Heretics – Chapter 1: Introductory Remarks on the Importance of Orthodoxy « Journeys of a Windmill Fighter

A terrific reading of the text.