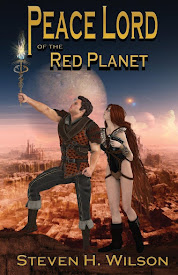 Peace Lord of the Red Planet

Shepherd Autrey is a Quaker, a physician, and a man deeply disturbed by the madness around him as the War Between the tates bears down on his America in 1863. Dared by a friend to take an active role, Shep volunteers to provide humanitarian aid to the victims of Sherman’s scorched earth campaign in the Shenandoah Valley. There he runs foul of a Confederate recruiting drive and fi nds himself hanged by the neck from a tree. Awakening in a strange land which can’t possibly be earth, Shep is plunged into battle and saves the life of an alien warrior prince. Hailed by bloodthirsty killers as the bravest man alive, Shep combats his conscience, his fl agging faith, and an ever-growing number of people who want him dead.

A good book that got a bit to religious for my taste at points, i guess it was needed to put things in perspective. Parts of it shook me and i was baffled by the authors guts to dive into some subjects. I take away half a star to 4 1\2 only because of the bleak and a bit boring ending to an otherwise daring and exiting story. The reading leave nothing to want, that i give 5 stars.

This is clearly a well planned story with excellent plot and character development. I can't actually pin it down to a solely a SF tale as it has many shades of fantasy as well. It was interesting to watch the main character's strict religious beliefs slowly peel away as he ...

One of a very few stories I recommend. A first-person story that was made to be read aloud. One speaker pulls off several characters, giving them all unique voices with emotion in there that pulls you into the story. The story is a strange collection of mythology, action, religion, and ...

Qualland, sorry you were taken by surprise. The subject matter is adult. I would disagree that the content is pornographic, however. Pornography, by nature, is blatant in its descriptions and intended only to promote arousal. While there is frank discussion of sexuality, and the narrator experiences several sexual encounters, the ...

Thanks for hanging in there, Steph! The story was intended to be thought-provoking, and I think that made some listeners / readers uncomfortable. I'm glad you enjoy my narration style! My next book (coming in February) is probably a bit more mainstream. It's a sequel to my earlier book, Taken ...

I had to make a comment. I felt awkward with this book most of the time, but I got over that and listened to the end. You narrate wonderfully. I think it's the main reason I kept going. And I'll admit the story was very creative. :)

A Sci-Fi adventure that keeps a solid pace full of well developed characters. My only complaint is the heavy reliance on religion. By the end of the story the author nearly devolves into a sermon and as an atheist the constant preaching began to grow wearisome.

Thanks for the review! I'm very flattered by the Heinlein comparison. Hadn't really had RAH in mind as I wrote, but of course he was the one who turned me on to the John Carter novels, which he referenced frequently in his later works.