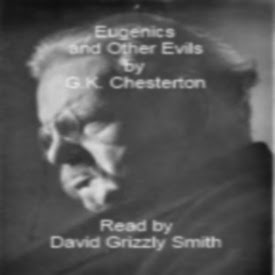 Eugenics and Other Evils

I think G.K. Chesterton explains his book rather well in his introduction, but it might help to start with a sense of the time in question. Chesterton started work on Eugenics and Other Evils in about 1910, but it was not completed and published until 1922. In his own introduction he talks about the period before and after "The War." The war he refers to is now called World War One.

We now have a distaste for the word Eugenics, largely driven by events in World War Two. But at the time this book was published, Eugenics was lauded to the skies as a wonderful idea, and Chesterton was nearly the only person saying in writing that Eugenics was in fact evil. A case could be made, and has been made, that today, though the word Eugenics is avoided, some practices that are in fact Eugenic practices, and some sciences that are in fact Eugenic sciences, enjoy great popularity and engender great public enthusiasm. To which practices and which sciences I refer, is left as an exercise for the reader.

"Though most of the conclusions, especially towards the end, are conceived with reference to recent events, the actual bulk of preliminary notes about the science of Eugenics were written before the war. It was a time when this theme was the topic of the hour; when eugenic babies (not visibly very distinguishable from other babies) sprawled all over the illustrated papers; when the evolutionary fancy of Nietzsche was the new cry among the intellectuals; and when Mr. Bernard Shaw and others were considering the idea that to breed a man like a cart-horse was the true way to attain that higher civilisation, of intellectual magnanimity and sympathetic insight, which may be found in cart-horses. It may therefore appear that I took the opinion too controversially, and it seems to me that I sometimes took it too seriously. But the criticism of Eugenics soon expanded of itself into a more general criticism of a modern craze for scientific officialism and strict social organisation."

The book is still controversial, and many people with many different political agendas point to "Eugenics" as backing up whatever claims they make. In any case, a remarkable number of comments and observations by Chesterton, on a wide variety of topics, could have been written last week. It was worth producing, and I think you'll find it worth reading.

Thank you, Grizzly! This is a brilliant little book, and a much needed non-fiction addition to Podiobooks' library. Chesterton has actually changed my opinion of eugenics now that I have listened to this fascinating work. A couple of his points no longer apply in the DNA era of genetic research, ...

I'd agree with you on that, and I think it applies for all of his books I've recorded, "Heretics" in particular. You may or may not end up agreeing with his central premise, but he makes hundreds of little comments and references that tend to be very quotable, and most ...

[...] This post was mentioned on Twitter by Podiobooks.com, Robertbecker. Robertbecker said: Now releasing Eugenics and Other Evils by Gilbert Keith Chesterton: David “Grizzly” Smith is our leading contribut... http://bit.ly/8ZZEMD [...]

Amen for the narrator....this book is great but one I couldn't sit still to read on my lonesome.... its a sad world we live in....

Very important book! This affects all of us!

Today more relevant than ever! Super recording. Thanks for the great narration!

very interesting bookand so well read thankyou to the narrator.