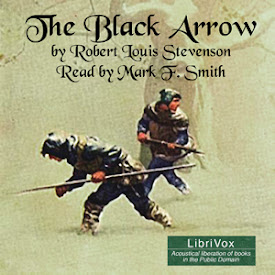 In the unsettled years of England's War of the Roses, where a man stood on the issue of kingship could make his fortune... or end his life. Dick Shelton, a nobly-born lad, is on the cusp of manhood, and he is thrust bodily into this stew where allegiances shift under one's feet. Circumstances cause him to fall in with a gentlemaiden in boy's disguise. Until he learns of the deception, Dick is unaware that the young lady is an heiress whom his guardian Sir Daniel had kidnapped. And the introduction of an outlaw with a penchant for putting black arrows into the bodies of the men who had wronged him affords Dick a worrying hint - that Sir Daniel might have been the man that had murdered Dick's father! - Summary by Mark F. Smith (8 hr 54 min)

2-3 The Room Over the Chapel

5-3 The Battle of Shoreby, concluded

5-5 Night in the Woods: Alicia Risingham

5-6 Night in the Woods (concluded: Dick and Joan

I've had the great pleasure of listening to "The Black Arrow" read by Mark F. Smith. Mr Smith made the listening experience terrific, by his competence and expertise in reading both the narrative and the individual voice characterizations. At no time did he allow the reading to be about him -- his voice was the vehicle transporting the story to the listener without distraction. While I'm only recently a Librivox listener, I'd considered that I could read aloud as well as the other volunteers I'd heard, but after hearing Mr Smith's skill, I don't think I will volunteer after all. I'd prefer to simply find the stories he's read and bask in selfish enjoyment.

a war of the roses romp!!

Mark Smith is an awesome reader and does a fabulous with this adventure story of a stupid teenager. Our dumb but brave hero wins his love and they live happily ever after. An historical romp through the Wars of the Roses!!

Wonderful story! Action, adventure, (with a little romance in between) and a remarkable reader! Definitely a classic story of swords and knights!

If you liked "Treasure Island" and "Kidnapped," you'll like this one, too. Teenager Dick is the ward of Sir Daniel, who is just keeping him around to get as much money out of him as possible, including taking whatever dowry he can get when he "sells" Dick in marriage. Before this can be done, however, Dick helps a young lad escape from Sir Daniel, gets a hint from some woodland outlaws, and starts asking too many questions about who is responsible for his father's death. Set during the Wars of the Roses, when the houses of Lancaster and York were struggling for supremacy, Sir Daniel has succeeded in appearing loyal enough to each side to enrich his own coffers. But the woodland outlaws know his duplicity and his cruelty to his tenants, and have him on their list of enemies to be killed with a black arrow. Throw in a little romance and chivalry, and you've got yourself a somewhat complex, but always entertaining yarn. Mark Smith, as always, reads this beautifully. Highly recommended!

Love listening to books read by Mark Smith. He does a great job. I've read almost all Tobert Louis Stevenson's books now and have yet to be disappointed. I love getting immersed in the historical time periods and settings of his novels.

Incredible reading as per usual by mark! Thank you so much for your work! The story itself was quite a good one, And has cemented my love for Roberts work (anyone who liked this should like ‘Kidnapped’ and ‘treasure island’ of course too!)

One of my daughter's favorite books.

I enjoyed listening to the book, but not one of my favorites books; it's good but not GREAT. Mark Smith's voice is clear for easy listening. Thank you, Mark Smith and Libravox.

Mark Smith is a great reader by his effort, by his talent and in large part because he seems to be having so much fun in the telling of the story. Thank you Mark.