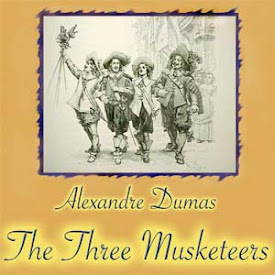 The Three Musketeers (Les Trois Mousquetaires) is a novel by Alexandre Dumas, père. It recounts the adventures of a young man named d'Artagnan after he leaves home to become a musketeer. D'Artagnan is not one of the musketeers of the title; those are his friends Athos, Porthos, and Aramis -- inseparable friends who live by the motto, "One for all, and all for one".

The Three Musketeers was first published in serial form in the magazine Le Siècle between March and July 1844. Dumas claimed it was based on manuscripts he had discovered in the Bibliothèque Nationale. It was later proven that Dumas had based his work on the book Mémoires de Monsieur D'Artagnan, capitaine lieutenant de la première compagnie des Mousquetaires du Roi (Memoirs of Mister D'Artagnan, Lieutenant Captain of the first company of the King's Musketeers) by Gatien de Courtilz de Sandras (Cologne, 1700).

Dumas' version of the story covers the adventures of D'Artagnan and his friends from 1625 to 1628, as they are involved in intrigues involving the weak King Louis XIII of France, his powerful and cunning advisor Cardinal Richelieu, the beautiful Queen Anne of Austria, her English lover, George Villiers, 1st Duke of Buckingham, and the Siege of La Rochelle. Adding to the intrigue are the mysterious Milady de Winter, and Richelieu's right-hand man, the Comte de Rochefort. (summary from wikipedia)

THE THREE PRESENTS OF D'ARTAGNAN THE ELDER

THE ANTECHAMBER OF M. DE TREVILLE

THE SHOULDER OF ATHOS, THE BALDRIC OF PORTHOS AND THE HANDKERCHIEF OF ARAMIS

THE KING'S MUSKETEERS AND THE CARDINAL'S GUARDS

THE INTERIOR OF "THE MUSKETEERS"

A MOUSETRAP IN THE SEVENTEENTH CENTURY

IN WHICH THE PLOT THICKENS

M. SEGUIER, KEEPER OF THE SEALS, LOOKS MORE THAN ONCE FOR THE BELL IN ORDER TO …

THE BALLET OF LA MERLAISON

Read by chriss the girl

ARAMIS AND HIS THESIS

THE WIFE OF ATHOS

HUNTING FOR THE EQUIPMENTS

D'ARTAGNAN AND THE ENGLISHMAN

IN WHICH THE EQUIPMENT OF ARAMIS AND PORTHOS IS TREATED OF

A GASCON A MATCH FOR CUPID

HOW, WITHOUT INCOMMODING HIMSELF, ATHOS PROCURED HIS EQUIPMENT

THE SEIGE OF LA ROCHELLE

THE UTILITY OF STOVEPIPES

THE COUNCIL OF THE MUSKETEERS

CHAT BETWEEN BROTHER AND SISTER

WHAT TOOK PLACE AT PORTSMOUTH

THE CARMELITE CONVENT AT BETHUNE

THE DROP OF WATER

THE MAN IN THE RED CLOAK

an adventure story with many twists

i dont care what other may have stated, i think the readers did a great job! i usually avoid books where each chapter is read by a different person, but this one turned out good. a few short chapters had noise in the background or mispronounced words - but the readers are not being paid or in a contest for accuracy. overall read with good emphasis, volume, and pausing. the story is adventurous from the beginning. and just when you think they have got away from a foe - or trapped them - things change! its not a book of morals, the 1600s did have men who ran around with married women or tried to make "many conquests". gambling was an accepted past time. and drinking alcohol as your only beverage was normal. so while we may at first think of this as a kids story, the content is clearly PG13. i think adults, male and female, will love this book.

I read this book in Russian at 12. And I very much enjoyed the English version. Such language delighted my ear immensely. While driving for long hours, this book colored my days and gave joy to my feelings. I definitely would recommend this book to anyone. And for this free gift of enjoyment some small inconveniences in pronunciation won't matter to those who can appreciate it. MERCI BEAUCOUP!

quite the eye opener

Not the best of the classics I have listened to on here (Dracula, Frankenstein, count of monte cristo, etc.) but nonetheless, very good. One reader throughout would've been preferable, but I think all of the readers did a fine job. None had an accent or cadence that I couldn't understand / follow. Well done and thank you for taking the time to record!

An enjoyable book. Alexandre Dumas knows how to keep the reader interested to read on. A great thanks to the readers who contributed to the task. Although some words were mispronounced, it didn't lessen the joy of listening to the book.

The story is engaging and the readers all do a great job.

I don't get why everyone is like this book is so good. It's all about three men who murder, have affairs, gamble, and are alcoholics. These guys are suppose to be heroes but in reality they are disgracefull. Wasn't worth listening to at all. Take my advice and go and listen to a good story not this garbage. Other than that the readers were amazing. They read the story very well.

This book turned out to be quite a bit longer than Id anticipated. Not that that is a bad thing. I quite enjoyed the adventures of the four. I was surprised also by the storyline since Id only ever watched the movie (90's? version). Definitely a book everyone should read (or listen to) at least once in their life.