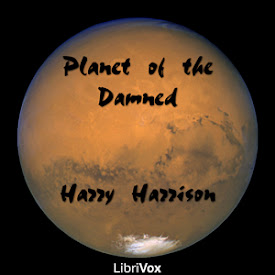 Planet of the Damned

Once in a generation, a man is born with a heightened sense of empathy. Brion Brandd used this gift to win the Twenties, an annual physical and mental competition among the best and smartest people on Anvhar. But scarcely able to enjoy his victory, Brandd is swept off to the hellish planet Dis where he must use his heightened sense of empathy to help avert a global nuclear holocaust by negotiating with the blockading fleet, traversing the Disan underworld, and cracking the mystery of the savagely ruthless magter.
Summary by Great Plains (5 hr 59 min)

Very well done work by the readers. Thank you. This elaborate fiction could have easily been messed up. The science throughout the book was excellent. If the author had been around today, he might have explored epigenetics. He was that current and insightful for his time.

I'm glad I read the reviews!

Brion is a winner of the 20's and is a champion. He plans to live his life in luxury now. Imagine his surprise when a prior winner tells him he is needed elsewhere to complete a special mission that only he can do. Brion is special in a way that he hasn't come to understand yet. But he will need all of his warrior skills and his special talent to save the planet of Dis. This is a really neat SciFi, well-balanced with a bit of everything. Reading is fine, no issues come to mind. Enjoy!

one of the best

love the narrator from chapter 13-16! he did special changes I had never heard a volunteer do with their reading. very moving voice actor! felt like i was really there! just wish he gave his name. I would love to hear him do more. finished the story in one day it was so absorbing. wish he did the whole book but the rest are very good. story is thrilling!

Dams are tools of white oppressors used to destroy the natural wild life and flow of water. The evil white people in this story have dammed an entire planet. Shame on them. The story is also raycyst because there is No mention of the transgendered Latin X contribution to avoiding nuclear catastrophy caused by old white males. This story is the moral equivalent to Mein Kampf

Old school Sci-fi at it's best.

A rip - roaring tale, from one of the masters of the genre, full of adventure and intrigue in a very alien culture. The only criticism, using multiple narrators slows the pace, as it takes a few minutes to adjust to each new readers style, hence four instead of five stars.

other readers did good. one of the guys was FRACKING AMAZING! he yelled! it startled me! sound effects! he went all out. i want to listen to all of his stuff. amazing. the first reader should contribute in other ways, thank you for the effort though sir!

I'm usually skeptical if multiple readers, however all of them in this one were easy to adjust to and there were no jarring transitions between them. the story was great, full of twists and turns, and generally entertaining