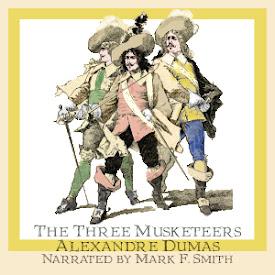 D’Artagnan, son of a poor Gascon aristocrat, travels to Paris to seek his fortune. His family connections enable him to obtain a position in a Guard regiment. His provincial ingenuousness and his hot-headed sense of honor earn him three duels in as many hours. Thankfully, his preparation with the sword is sufficient to recommend himself to his Musketeer antagonists, and they – Athos, Porthos, and Aramis – become his fast friends.

But fate also crosses D’Artagnan’s path with some dangerous people who become his opponents: a mysterious “man from Meung” and a woman who styles herself Milady, who has formidable seduction skills and a heart that is mean and violent. Fate also inserts D’Artagnan and his Musketeer friends squarely in the middle of a love triangle of heroic proportions – between Anne of Austria (the Queen of France), George Villiers (the Duke of Buckingham, France’s enemy), and the great spymaster, his Eminence the Cardinal Richelieu. Both of these gentlemen can command the armed forces of their respective countries to battle simply for the pleasure of beating the other. And the Musketeers must serve and risk life and limb at the siege of La Rochelle, a place where the Duke and the Cardinal have chosen to match wills.

In this age it was common for young cavaliers to live off the gifts of rich mistresses, and the four friends are certainly, it seems, bereft otherwise, although all are respectably employed as guardsmen to the King himself. Their love connections weave a further web about them which often seems to sidetrack their duty to King and country.

It takes all the efforts of the four to fend off the lethal consequences of mixing in the affairs of their betters and the slings and arrows (not to mention the musket and cannon balls!) of their outrageous fortunes. (Mark F. Smith) (26 hr 40 min)

The Three Presents of D'Artagnan the Elder

The Antechamber of M. de Treville

The Shoulder, The Baldric, and The Handkerchief

The King's Musketeers and The Cardinal's Guards

The Interior of the Musketeers

A Mousetrap in the Seventeenth Century

In Which the Plot Thickens

In Which M. de Segurier, Keeper of the Seals, Looks More Than Once for the Bell

The Ballet of La Merlaison

Aramis and His Thesis

The Wife of Athos

Hunting for the Equipments

D'Artagnan and the Englishman

In Which the Equipment of Porthos and Aramis Is Treated Of

A Gascon a Match for Cupid

How, Without Incommoding Himself, Athos Procures His Equipment

The Siege of La Rochelle

The Utility of Stovepipes

The Council of the Musketeers

Chat Between a Brother and Sister

What Happened at Portsmouth

The Carmelite Convent at Bethune

The Drop of Water

The Man in the Red Cloak

Narrated by Mark Smith, I think

One of the best narrators on Librivox. Its rare for a single narrator to do a story of this length but the story is the more awesome for it. As for the story itself, the ending tone was much different than the old Gene Kelly movie that brought me here, but I loved it all the same. Great story, great narration.

Solid reading of an excellent, classic story -one of the most widely read French novels of all time! I prefer the consistency of pronunciation and pacing of this version as compared to the version read by a group of volunteers (although that one is listenable, too). Many thanks to Mark Smith!

A Narration For One & All

Mr Smith delivered a riveting narration. The versatility of his voice brought life to all characters therein. To one, such as I, familiar with the movie adaptations, it was fascinating to learn the full story of Musketeers & discern the variations & similarities betwixt the adaptations & the famous tome itself. In listening, I felt I heard Van Heflin's Athos & Gene Kelly's D'Artagnan or Charlton Heston's Cardinal Richlieu & Richard Chamberlain's Aramas. All portrayals, however, pale in comparison to Mr Smith's singularly accomplished portrayal of M'Lady- particularly within the 'Captivity' chapters of the story. A Splendid Narration breathing singular Life into an often told, though equally often abridged, adventure.

Not only is the story an excellent one, the dictation one of the best I've heard. At no time did I have any problem in knowing which character was which due to the narrators brilliant voices. It has cost me more of my spare time than I could afford in listening to this recording, but I have gladly paid it and will do so again.

Mark F. Smith brings the characters to life in this excellent rendering of The Three Musketeers. I have listened to many of Mr Smith’s readings and is by far my favorite narrator on LibriVox. I highly recommend this audio version along with others such as Sherlock Holmes and White Feather. Thank you, Mr Smith, for volunteering your time for our enjoyment!

I have read this book before and the story itself is not my favorite ever, but enjoyable. Mark Smith increases the enjoyment with his spot-on voices and intonations for the characters. Actually, thanks to this reading I picked up on the comical aspects of some scenes that I had missed before!

Mark Smith, as always, has done an astounding job reading this book. He has very recognizable accents for each character and reads at the perfect pace. The story is interesting, engaging, and fun. Thank you for another great work, Mark Smith and Alexandre Dumas!