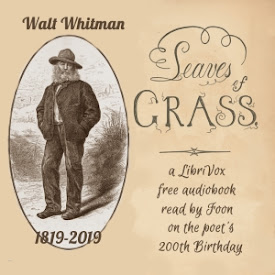 In honour of Walt Whitman's 200th birthday (31 May 2019) we bring you a solo recording of his seminal work Leaves of Grass. Originally published in 1855, the work started as a collection of 12 unnamed poems. However, Whitman spent most of his life writing and re-writing Leaves of Grass, resulting in many different editions published throughout his life. The final collection, which is recorded here, is a compilation of about 400 poems separated into 35 books.

This book is notable for its discussion of delight in sensual pleasures, and exalting the body and the material world. At the time, such candid displays were considered highly immoral, which led to reviews considering it "offensive", "obscene", "a mass of stupid filth", or suggesting it should have been burned after writing. Leaves of Grass even became banned in various locations, which only led to increased sales, with some printings even selling out on the first day. To this day, the work's legacy remains strong, and is one of the most important collections of American poetry.

Among some of the best known poems contained in this work are "O captain! My captain!", "I sing the body electric", and "Song of Myself".

Book 7: Song of the Open Road

Book 9: Song of the Answerer

Book 12: Song of the Broad-Axe

Book 13: Song of the Exposition

Book 14: Song of the Redwood-Tree

Book 15: A Song for Occupations

Book 20: By the Roadside

Book 25: Proud Music of the Storm

Book 32: From Noon to Starry Night

A must-read to understand America. My Top10.