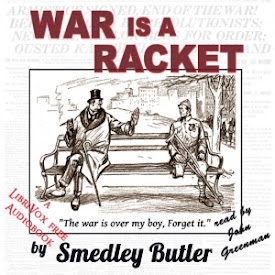 War Is a Racket

Marine Maj. Gen. Smedley Butler's expose of American Corporate Imperialism. Butler said, “I served in all commissioned ranks from second lieutenant to Major General. And during that period I spent most of my time being a high-class muscle man for Big Business, for Wall Street, and for the bankers. In short, I was a racketeer for capitalism. I suspected I was just part of the racket all the time. Now I am sure of it.” - Summary by John Greenman and https://www.americanswhotellthetruth.org/portraits/major-general-smedley-butler (1 hr 0 min)

Chapter 1: War Is A Racket

Chapter 2: Who Makes The Profits?

Chapter 3: Who Pays The Bills?

Chapter 4: How To Smash This Racket!

Chapter 5: To Hell With War!

Wow. Very enlightening! War is a big and immoral business. This is a must-read.

As appropriate today as it was back then

Excellent commentary on the real casualties of war and as applicable today as it was years ago when first written. Especially enjoyed the proposed solutions to the problems of war—such as letting only those who will fight in wars vote on authorizing them rather than a corrupt congress of unfit elderly with self-interests. Narrator seemed to ham it up a bit to sound more soldier/general-like for my ear. Actually preferred for my taste his natural voice he used in transitions more to his book voice. Yet overall splendid job on a little-known splendid work.

A sad prognosis of things to come before the WW2. This guy knew and noone gave damn. Money won. The reading was very good and intense.

It made me review to continue.

Great book. The Narrator is fantastic!

A sobering look at where the money goes

Butler was a US Marine General, angry at the atrocities of war and the arrogance of Democratic representatives in cahoots with financially interested non-combatants. This is a short treatise that argues from a place of deep pain and activism. Butler lays out how millionaires are made by exploiting soldiers in war, and the heinous damage done to a country saddled with debt, loss, having to carry the scars of living with survivors of combat with damaged bodies and broken minds. He outlines some of the sheer waste of huge contracts that are not fit for purpose, but still profit those who fill them. He suggests that if those who would be conscripted soldiers were the ones to decide if we war, rather than those who seek to profit from that war, then war would not happen. He suggests that if Defence is necessary, forces need not go abroad to find conflict. Idealistically he muses, what if we were all being paid the same as the man in the trench?...

Smedly Butler is a crybaby

How are the elite globalist going to bring democracy and social justice to unincorporated areas of the world without war? We need war to show the uncivilized nations the benefit democracy as governed by a global elite. Sure some folks will have a JDAM land on their head, but the survivors will benefit from easy access to Coca-Cola and nonbinary bathrooms. A net gain.

A vital read for anyone who is considering joining any armed service or wants to understand some of the workings of Governments. Note, please edit the description on this, for he was a Marine General not an Army General. There is a difference and many teeth have been knocked loose over that difference.