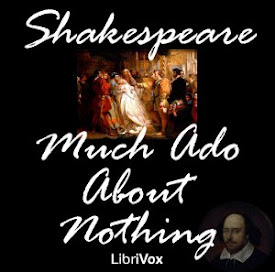 Much Ado About Nothing

Written around the middle of his career, Much Ado About Nothing is one of Shakespeare's great festive comedies. The men are back from the war, and everyone is ready for romance. The dashing young Claudio falls for Hero, the daughter of Leonato, governor of Messina, and his friend Don Pedro helps him secure her affection. These youthful lovers are contrasted with the more experienced (and more cynical) Benedick and Beatrice, who have to be tricked into falling in love. Don Pedro's bastard brother, Don John, provides the intrigue, and the dimwitted constable Dogberry provides the laughs. (Summary by Elizabeth Klett)

I enjoyed this and saw why it is considered one of the great classics. But at times the reader's recordings were poor in sound qaulity.

Elizabeth Klett and Karen Savage (along with the rest of the cast) are stunning in this ensemble rendition of the Shakespeare favorite! Hilarious and suspenseful, THIS is the version you want!

It's always better to go to the source material.

The movies are nice to way to watch but they are never as enjoyable as the original.

Good book but the sound was off. Most of the male voices were not accurate(they…

It would have been better if men had played men.

Great book. The sound quality was poor at times

Great stuff thx to all readers!