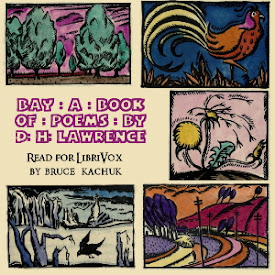 Bay: A Book of Poems

The superb skill and dexterity of D.H. Lawrence, a writer who profoundly influenced the literature of the twentieth century, is very evident in this collection of poems conceived during the years of The Great War. Lawrence, living a semi-nomadic lifestyle in England throughout these years, seized the opportunity to write of events and their effects from an objective but by no means dispassionate perspective.

Indeed the passion of Lawrence while attempting to understand the collective motivation of mankind in the name of wartime vengeance is very evident throughout this work, manifesting itself in poems of deep analytical insight, clarity of thought and Lawrence's characteristic rage against the dehumanization of his fellow man - exhibited here by the predominance of the war machine and profusely mirrored by its regimentation, united malevolence and resulting horrors of conflict.

In addition, Lawrence's unsurpassed poetic skill vividly portrays the wartime vulnerability of the British homeland as "a flat red lily with a million petals", unfolding and meeting its doom as "a dark bird falls from the sun"; marching soldiers are depicted by Lawrence as, "advancing as water towards a weir"; while the "coiled, convulsive throes of this marching" is described as adopting a universality typical of soldiers everywhere, advancing while never knowing their eventual fate nor where or when it will be met.

These poems, these vignettes of a nation engulfed in war, these masterworks of color on a canvas of bewilderment form an important contribution to the literature of World War I and exhibit an essential facet of D.H. Lawrence the man - the brilliant wordsmith whose portrayal of the human condition is unsurpassed in its honesty and candor.
- Summary by Bruce Kachuk (0 hr 31 min)

The Little Town at Evening

Bread upon the Waters

Rondeau of a Conscientious Objector

Tommies in the Train