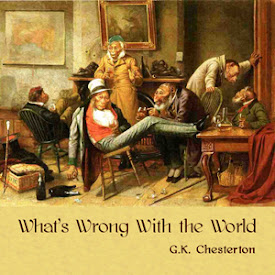 What's Wrong With the World

Gilbert Keith Chesterton (1874–1936) has been called the “prince of paradox.” Time magazine observed of his writing style: “Whenever possible Chesterton made his points with popular sayings, proverbs, allegories—first carefully turning them inside out.” His prolific and diverse output included journalism, philosophy, poetry, biography, Christian apologetics, fantasy and detective fiction.

The title of Chesteron’s 1910 collection of essays was inspired by a title given to him two years earlier by The Times newspaper, which had asked a number of authors to write on the topic: “What’s wrong with the world?”. Chesterton’s answer at that time was the shortest of those submitted - he simply wrote: “Dear Sirs, I am. Sincerely yours, G.K. Chesterton”. In this collection he gives a fuller treatment of the question, with his characteristic conservative wit. (Summary by Wikipedia and Carl Manchester) (7 hr 4 min)

The Fear of the Past

The Enemies of Property

The Wildness of Domesticity

History of Hudge and Gudge

The Homelessness of Jones

The Charm of Jingoism

Wisdom and the Weather

The Emancipation of Domesticity

The Romance of Thrift

The Coldness of Chloe

The Pedant and the Savage

The Modern Surrender of Woman

The Brand of the Fleur-de-Lys

Sincerity and the Gallows

The Queen and the Suffragettes

The Calvanism of To-day

The Tricks of Environment

The Truth About Education

The Humility of Mrs Grundy

The Need for Narrowness

The Case for Public Schools

The School for Hypocrites

The Staleness of the New Schools

The Empire of the Insect

The Fallacy of the Umbrella Stand

The Dreadful Duty of Gudge

A bold and fitting title to a true classic

Switch around a few words and you could read parts of this in any news outlet. The hypocrisy of the capitalist and socialist is spelt out in clear and common terms. every chapter should be read and reflected upon then read again until each term is properly understood. A treasure of information awaits the reader on what, where and why a family is. If you must skip the whole thing read the conclusion, it provides a true summary of what is, a truly great and highly philosophical text.

This is a fascinating and well-reasoned book, but likely to raise eyebrows or perhaps even blood pressure, particularly if it is read shallowly. Here Chesterton speaks out for justice and reform. Here he defends the traditional family and speaks with immense respect for women and for not forcing them into the same mold as men. Here he says, "With the red hair of one she-urchin in the gutter I will set fire to all modern civilization."

Some readers were worse than others. The book is actually not good. A lot more of it is against feminism and the female suffrage than is usually mentioned. Actually it is entirely about politics, and none of his arguments are any good, and his prose is not at his best

Overall the reading was excellently done, but there were two chapters read with an accent so thick I couldn't understand them and had to skip over them! Other than that issue, a quality recording of a quality book.

I found this interesting group of essays difficult to listen to primarily because of the wild variations in volume from one narrator to another. One woman was so quiet that I simply couldn't turn it up enough, even wearing earphones. The essays themselves were certainly thought-provoking, particularly those on women. I will have to find out more about the author. Was he just a product of his place and time?

As always the master of starting in a crazy rule then lucid working out of the unpredicted ougcomes. a few chapters were read in accented English that was hard to follow.

Amazing how social issues stay the same over 100 years. I will be rereading this.

He's just too smart for me. I think I will need to read several times to understand.