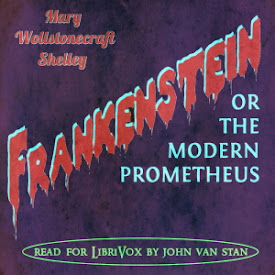 Frankenstein: or, the Modern Prometheus (Version 4)

This is a classic (gothic) horror story, and one of the earliest examples of science fiction. The main characters are Dr. Frankenstein and his creation, the daemon. Shelley called the scientist a "pale student of unhallowed arts" and his creation a "hideous phantasm of a man." This story is not only delightfully frightful, but arguably represents one of the clearest criticisms of science during a time when, like the daemon, it was leaving its own infancy and, like Dr. Frankenstein, testing its ethical boundaries. As Shelley said, "Frightful must it be; for supremely frightful would be the effect of any human endeavour to mock the stupendous mechanism of the Creator of the world. His success would terrify the artist; he would rush away from his odious handywork, horror-stricken." - Summary by jvanstan (10 hr 0 min)

Definitely an above average recording. Narrator does an excellent job with the voice of the monster.

Great reading and the voice for the daemon was truly chilling!