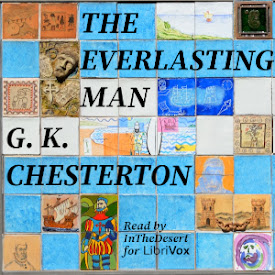 This book needs a preliminary note that its scope be not misunderstood. The view suggested is historical rather than theological, and does not deal directly with a religious change which has been the chief event of my own life; and about which I am already writing a more purely controversial volume. It is impossible, I hope, for any Catholic to write any book on any subject, above all this subject, without showing that he is a Catholic; but this study is not specially concerned with the differences between a Catholic and a Protestant. Much of it is devoted to many sorts of Pagans rather than any sort of Christians; and its thesis is that those who say that Christ stands side by side with similar myths, and his religion side by side with similar religions, are only repeating a very stale formula contradicted by a very striking fact. To suggest this I have not needed to go much beyond matters known to us all; I make no claim to learning; and have to depend for some things, as has rather become the fashion, on those who are more learned. As I have more than once differed from Mr. H. G. Wells in his view of history, it is the more right that I should here congratulate him on the courage and constructive imagination which carried through his vast and varied and intensely interesting work; but still more on having asserted the reasonable right of the amateur to do what he can with the facts which the specialists provide. (Prefatory Note) (10 hr 13 min)

Introduction: The Plan of this Book

The Man in the Cave

The Antiquity of Civilisation

The War of the Gods and Demons

The End of the World

The God in the Cave

The Strangest Story in the World

The Riddles of the Gospel

The Witness of the Heretics

The Escape from Paganism

The Five Deaths of the Faith

Conclusion: The Summary of the Book

For those worried about decreasing religiosity or Church participation, this book is a great reminder of the flow of time. Just when the Church should become unimportant to a society it displays a knack for reviving itself and the cultures and souls it serves. Worth reading in a time when, "None" has become the most common response to any poll of religion or belief. This is a reminder of a pattern has repeated many times through history: both reassuring and a call to prayer and outreach.

The reader did an excellent job, intoning the work with just the right character, just the right emphases, and just the right speed. The text was quite good as well: I had reservations in the first half, when Chesterton was clearly speaking on anthropological matters which have advanced since his time, and of which he is not a scholar in the first place. But his main points seem to hold, and by the middle of the book the payoff was well worth it.

This is very well read; it is one of Chesterton's very best.

Very easy to listen to. Thanks