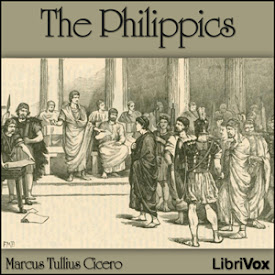 A philippic is a fiery, damning speech delivered to condemn a particular political actor. The term originates with Demosthenes, who delivered an attack on Philip II of Macedon in the 4th century BCE.Cicero consciously modeled his own attacks on Mark Antony, in 44 BC and 43 BC, on Demosthenes's speeches, and if the correspondence between M. Brutus and Cicero are genuine [ad Brut. ii 3.4, ii 4.2], at least the fifth and seventh speeches were referred to as the Philippics in Cicero's time. They were also called the Antonian Orations by Aulus Gellius. It is ironic that they were named after a series of speeches that failed to effectively warn the Greeks of the danger of Philip of Macedon whose son, Alexander the Great, went on to be one of the greatest conquerors of all time. After the death of Caesar, Cicero privately expressed regrets that the murderers of Caesar had not included Antony in their plot and became focused on discrediting Antony. Cicero even promoted illegal action, such as legitimatizing Octavian's private army. In total, Cicero made 14 Phillipics in less than two years - an impressively energetic feat for the over 60 ex-consul. Cicero's focus on Antony, however, would contribute to his downfall as he failed to recognize the threat of Octavian and ignored and promoted illegal actions. Cicero's attacks on Antony did not go unpunished and in 43 BC he was proscribed and killed. His head and hands were publicly displayed in the forum discouraging those who would openly oppose the new Triumvirate of Octavian, Mark Antony and Lepidus. (Summary from Wikipedia) (9 hr 46 min)

This reading was very well done. I enjoyed listening to this book and learning more about Cicero the conflict with Mark Antony.