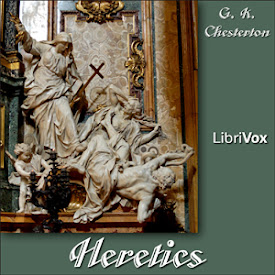 The Author Gilbert Keith Chesterton was born in London, England on the 29th of May, 1874. Though he considered himself a mere "rollicking journalist," he was actually a prolific and gifted writer in virtually every area of literature. A man of strong opinions and enormously talented at defending them, his exuberant personality nevertheless allowed him to maintain warm friendships with people--such as George Bernard Shaw and H. G. Wells--with whom he vehemently disagreed. Chesterton had no difficulty standing up for what he believed. He was one of the few journalists to oppose the Boer War. His 1922 "Eugenics and Other Evils" attacked what was at that time the most progressive of all ideas, the idea that the human race could and should breed a superior version of itself. In the Nazi experience, history demonstrated the wisdom of his once "reactionary" views.

Chesterton wrote several works of Christian apologetics, the best known of which are "Orthodoxy", "Heretics", and "The Everlasting Man". (Summary from Project Gutenberg) (7 hr 15 min)

On the Importance of Orthodoxy

On the Negative Spirit

On Mr. Rudyard Kipling and Making the World Small

Omar and the Sacred Vine

The Mildness of the Yellow Press

The Moods of Mr. George Moore

On Sandals and Simplicity

Science and the Savages

On Certain Modern Writers and the Institution of the Family

On Smart Novelists and the Smart Set

On Mr. McCabe and a Divine Frivolity

On the Wit of Whistler

The Fallacy of the Young Nation

Slum Novelists and the Slums

Concluding Remarks on the Importance of Orthodoxy

A champion of believing in something - especially if it's true

This is a brilliant work. The meat of it includes numerous references with which few modern readers will be deeply familiar, and an occasional gem of an idea. The intro (I mean the first two chapters and the preface) and conclusion are excellent. I appreciate the reader's work. He is decisive in his speech and does not strain in order to sound emotional.

A coherent view of philosophy

I have read his later book, Orthodoxy. There he spoke of things I would've not known why unless I read this one. I love his style and approach. If this world has gone wrong, left or right, it was because he could show the straight path.

As always Chesterton produces a masterpiece of thought and action. It is the one who studies the poor as though they are different than themselves who are the most nonsensical about poverty.

Amazing book with plenty of insights into modern believes. We are living out Chesterton's prophecy.

This book's misleading title kept me away from it for years. Mr. Chesterton's definition of a heretic seems to have less to do with religion per se, and more to do with faults of logic or intellectual laziness. Given when it was written, it helps to brush up on your 19th century English literature notes so you will recognize the writers he criticizes!

Thanks so much for this fine reading. Chesterton’s insights are profound. However, his insistence on mechanical, unrelenting paradoxes here and elsewhere grows wearisome. Or as he might say, “Paradoxes can be trying, but trying need not be paradoxical.”

beautifully done, this man was truly a man of excellent thoughts and expression

Must listen again with note taking, many jems.