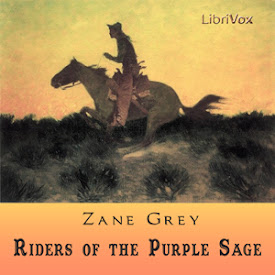 The year is 1871, and wealthy ranch owner Jane Withersteen is in trouble. She has incurred the displeasure of her Mormon church leaders by refusing to marry a church elder and by befriending Gentiles (non-Mormons). In rides Lassiter, the quintessential Western hero: mysterious, purposeful, a deadly gunslinger, but with an unexpected streak of gentleness. While Lassiter is assisting Jane at the ranch, her friend and rider Bern Venters is having an adventure of his own in the Utah canyonlands. Riders of the Purple Sage is a story of heroism, love, brave men and strong women, good dogs and fast horses. And who is that Masked Rider? (Summary by Laurie Anne Walden) (10 hr 45 min)

The Fall of Balancing Rock

It ended a bit more abruptly than I'm used to with Grey, but very satisfying otherwise. The reader was quite good, as well! I thought it was sort of funny just how often things were described as purple, from the rainclouds to the purple-black of someone's beard. it's definitely Riders of the PURPLE Sage! :]

If you haven't read many westerns, this is a great introduction. Unlike later westerns, it maintains the conventions of the genre, but with more depth and interest than some of its pulpy brothers. Walden reads clearly, smoothly, and simply. The recording is clear and well-made. For full review, see: http://www.freelistens.blogspot.com

This was such a delight to listen to. I've already made a list of the other books Leslie Anne Walden has read so that I might listen to those books as well. She enunciates clearly, speaks at an appropriate speed, and changes voices with the characters. Truly delightful!

A true masterpiece of western lore. Few female readers can bring a western to life, but this one did. Grey unmasked some dirty secrets of the Mormon fanatics; he was fortunate that they did not retaliate against him. Read this one.

Great Western that Set The Mold

This is a review of the novel, not the librivox recording. Westerns written in the early 20th and late 19th centuries can be hard to listen to, for to the dry style of writing one usually finds. I found this novel to be much more accessible than the vast majority of westerns from the same era. The easy concise language found in Riders of the Purple Sage allows modern readers to become immersed in the story. The story itself is wonderful. People often complain that it's predictable and derivative, but those people usually forget to take in to account that this novel is very old. It's a "classic" western that helped set the mold for the genre, so many a western that came later contains echoes from this novel. It has everything you expect and WANT from a good old western. A charismatic hero, a damsel in distress, and a menacing antagonist that's all too easy to hate. I highly suggest Riders of the Purple Sage for fans that can appreciate a western that checks all the marks.

I hadn’t read Zane Grey before and I found the writing a little simplistic and stilted but the narration of the vernacular text is excellent and really integral to the story. In time there is sufficiently good development of the characters and one warms to this tale of love, loyalty and tragedy. It’s really sentimental w high drama ; beautiful women betrayed and rescue by tough riders who find their anima, are part of the attraction. The descriptions of the natural rugged beauty of the America West, and the passages of the horses are great; particularly Wrangle’s race which is an unforgettable highlight. Coincidentally I saw a documentary that included Utah when listening which provided a visual of the area, and really added to the experience. The Mormons get a really bad press... Zane G must have had a history w them !

I have listened to lots of these and enjoyed this one more than most. Laurie Anne Walden did such a great job bringing this to life for me. I also appreciated the background ambiance with birds singing, etc. I've never read much Grey, so I wasn't sure exactly what to expect, but this was a very catchy story. At times I was right there fiery mad and ready to Lassiter someone. A few mentioned that the ending was abrupt. I don't disagree but I found it satisfying as well. I'd love to find out that there was a sequel to this book. I'd love it even more if the reader read them both!

Took me a while to adapt to the narrator but it was all good on the end. Probably not the tightest of Grey's books, particularly toward the end, one minute it's dragging then next it's over. As always an excellent evocation of place and landscape, great action...women are marginally more active than the average western and men are real men, at least th e only ones worth mentioning are!