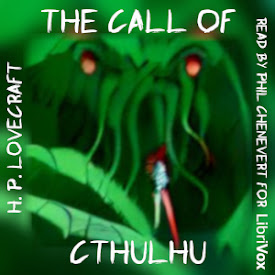 The Call of Cthulhu

The worshipers of this ancient tentacled horror are still with us, waiting for this terrible being to awake and take vengeance again on an earth filled with nonbelievers. Lovecraft delves into this eons old cult in the greatest detail of any of his stories about Cthulhu and gives us hints about how it is worshiped and the abominable rituals involved. Creepy. Very creepy. - Summary by phil chenevert (1 hr 24 min)

The Horror in Clay

The Tale of Inspector Legrasse.

The Madness from the Sea.

Oppresses non-normative religious ideals. Just because Cuthulu wants to devoir the universe does not mean the author should be allowed to write this hate-filled diatribe against the great old ones. Ban this book.

its read with surprising enthusiasm

its about bigots that torture capital confessions out of religious minorities to achieve convictions then death by hanging... According to the book they're only darky savages anyway,,, vomit