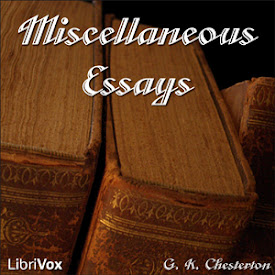 These eleven files are miscellaneous short essays or stories from G.K. Chesterton. They were chosen for not only their brevity but also for being shining exemplars of Chesterton's wit and whimsy. A fun but powerful introduction into the mind of the man that is G.K. Chesterton. (Summary by GK Cleveland) (1 hr 10 min)

On Lying in Bed

A Piece of Chalk

What I found in my pocket

A wonderfully crafted critique on misogyny

Here G.K. Chesterton takes a critical analysis of the oppressive phallogocentric patriarchy that resulted in the potatoes famine in the Indian subcontinent. We learn how oppressive normative gender roles in the 18th century led to the disenfranchisement of nonbinary Latino culture in Ireland. In other words Queen Elizabeth was responsible for low standardized test scores among African Americans because she failed to embrace Lesbianism. At least that is what I think Chesterton was saying. Seriously, though, Chesterton is great. But reading him might get you put on a list.

Amusing, but not his best

This collection contains the light, childlike, romantic side of G.K. Chesterton, but that side of him, while delightful in itself, is at his very best when it is married with sharp reasoning and a complete philosophy of life, and that doesn't come across in this work as well as it does in much of his other writing.

Check Gil out: just about everything he writes is wise, more so even than personal favorite wiseman samuel clemens who was regularly taken in. krazy funny guy just like twain, for instance lying in bed. Btw both funny wise guys wrote essays on this subject. Compare and contrast klass!

Each essay bears Chesterton's usual quick wit, which makes them immensely readable. They also contain his ever sharp critiques of our frequently repeated historical mistakes, which make him continually relevant. Fantastic read.

Chesterton’s wit and whimsy always make me laugh. Better yet, they make me admire the everyday cooking ware. The volunteers did an excellent job reading these essays.

All of the readers did a great job. All of the books or essays Cute good spirited.

Who knew essays could be such fun to listen to? Thank you readers for the fun.😊