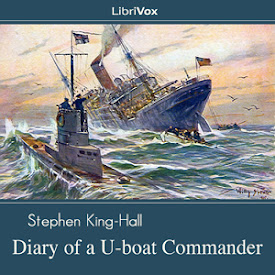 Diary of a U-boat Commander

Captain Karl von Schenk of the Kaiser's Navy is a stereotypical German nobleman - supremely self-confident, touchy about the divisions of class and any infringement on his place. He thinks he is handsome, has a suitably manly physique, an excellent singing voice, and a facility with writing. His wartime service related in his diary is a series of triumphs over harrowing circumstances, bringing his boat back in spite of the best efforts of the Royal Navy to stop him. (5 hr 21 min)

This is a fabulous book

I'm an older person (age 71) who spent 6 years in the Navy in peacetime serving on a Minesweeper. But anyone who has been on the sea for any length of time can identify with this tale of war, unrequited love and incredible suspense. The horror of World War I naval warfare is front and center, and young lives lost in the senseless slaughter of wartime.....well, what can you say? The story starts slowly, and sounds like a real diary, and it begins to grip you as you proceed through the book. It is a book you will long remember. The narrator is Mark Smith of Simpsonson, South Carolina whose mellow voice is simply captivating. You should seek out his other recordings. Trust me on this, you will enjoy this book, and you will never forget it.

diary of a uboat commander

An originator of the found footage format! this book is one of the best in its category. the text is utterly believable as having been written by a middle-aged German from the military class. the narrator is respectful and reverent of the man whose controversial story he is charged with conveying. This book becomes a page-turner after a slightly slow start. The amount of romance is just perfect, It is not allowed to detract from this picaresque story. anybody angry at modern Hollywood formats go to the light in having their intelligence respected! I recommend this book extremely highly!

Mr. Smith really does the story and it's characters justice with his talented reading. His portrayal makes the ebb and flow of the words feel.

This is an epic tale, read by Mark Smith. Mr. Smith's voice adds to the story, a depth of feeling, which allows the listener to feel as if they are reading this true tale themselves. I found myself very intrigued by the narration and the tale itself. I highly recommend this to anyone who has an interest in the historical significance of WWI, ond/or the history of submarine warfare.

Its was a great story, and a greater read, the quality of recording again, Bravo

excellent narration as always on this tragic wartime love story

A beautiful story of humanity, war and love. The story of a man who moves from the blind excitement of a young officer in pursue of destroying the enemies from his submarine, to the understanding of the futility and inhumanity of war. A beautiful love story. At the end of the book, an extremely moving letter of love red with intensity and commotion by an awesome Mark Smith.

So, so interesting. It gets so tense. I have listened to about 7 chapters already!In two days! It is not like the other war books where it is boring and slow. This book is well paced. And, it is rather fun! Also, some funny spots. Also some sad spots. It also has some kissing parts (Just in case you do not like that stuff)