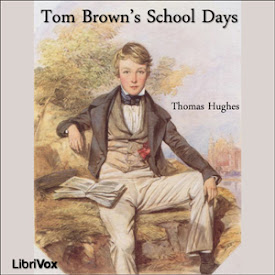 Tom Brown's Schooldays is a novel by Thomas Hughes first published in 1857. The story is set at Rugby School, a public school for boys, in the 1830s. Hughes attended Rugby School from 1834 to 1842.

Tom Brown was tremendously influential on the genre of British school novels, which began in the 19th century, and is one of the few still in print. A sequel, Tom Brown at Oxford, was published in 1861 but is not as well known. (Summary from Wikipedia) (10 hr 10 min)

Pt.1 Ch.7 Settling to the Collar

Pt 1 Ch 8 The War of Independence

Pt.1 Ch.9 A Chapter of Accidents

I listened to it at least over 10 times.

This is a great classic work that I wish I would have read/Listened too when I was younger. great coming of age story done in a very Victorian style.

This is an excellent recording of Tom Brown's School Days! There's a single reader throughout, which is always a plus, and icyjumbo's rendition is nearly flawless. It was a real pleasure to listen to... highly recommended!

I don't know your real name, yet each and every death on this planet deserves remembrance. Sadly, I know naught about you which I could remember, so I instead shall pray for your soul.

This novel I had enjoyed many years ago and it was a pleasure to hear it so very well read. Sleep well, Mr. "Icyjumbo"

This book is a treasure.So beautifully read, I was reduced to tears. Thank you 'icy jumbo'. Very highly recommended.

"Icy Jumbo" great name and a good narrator , with no bad accents