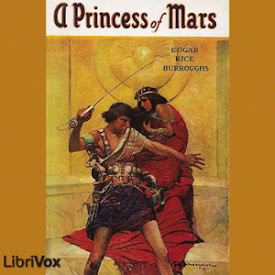 A Princess of Mars

Part One of Edgar Rice Burroughs’s Mars-Series. Easy, swank, pulp read about an omnipotent gentleman teleported to Mars, finding an outlandish society of ape-, tree- and lizardmen, red-, white-, yellowmen, brains on legs, strange bastions and curious apparatuses, where the strongest survives and women are needy beauties to be saved. How can something be so platitudinous and at the same time so imaginative and enthralling? Boys’ book for sure. (Summary by Stephan) (7 hr 10 min)

This is like Tarzan meets science fiction! Adventures, fist fights, battles - and it's all on Mars! This is classic adventure stuff, and the story grips you. At the same time, it's interesting to compare this early sci-fi to modern sci-fi. A lot of it shows it's age (don't let a feminist near this book, or any other by Edgar Rice Burroughs), and at the same time the story works just as well today - speculation on extending science known at the time (even when we know better today) and applying it to what new marvels may be dreamed of and especially what they may mean to a society was and is the essence of science fiction. The reading is very good, overall, but I must admit I found it rather distracting that the chapters are read by different people. Most were very good readers, but it disturbs your enjoyment of the story that you have to get used to new readers all the time. I'm not a native English speaker, and just getting used to the dialects take a little time.

Love the story and consider myself a big fan of Burroughs, but for the love of God 6 different readers!?!? All of the different accents on the part of the readers really detract from the story. Come on Ralph Snelson help a brother out! Can't you just take over all of Burroughs' books?

Brilliant book! After seeing the movie, imagining this was much easier. However way too many readers. PLEASE get rid of the Kris Peterson reader. Or teach her to use a microphone. Tony Hightower was a great reader. Thank you.

For the most part I enjoyed the story. It is wonderfully imaginative and has some exciting sequences. If you are a fan of old-fashioned scifi that reads like the adventure novels of a bygone era (i.e. lots of exposition about imaginary peoples and monsters) then you will probably enjoy it. For me the exposition was a bit dry and cliche, though to be fair it probably was not cliche when it was written more than 100 years ago. The romantic passages are laughably silly at best, and insultingly sexist at worst (again, mostly a product of the times). My biggest complaint, though, is with the narration - the narrator changes nearly every chapter. Narrators range from pretty good to nearly unintelligible. Each one has their own style, some even affecting an attempt at a southern drawl (I suppose because the protagonist is from Virginia). Bafflingly, some readers did several chapters, but not consecutively. The constant switching between voices would be jarring even if they were all good (they are not).

I listened to many of the chapters but finally had to give up. One of the readers had either a very deviated septum, some kind of allergy or perhaps a sinus infection which made her voice so nasally and horrible to listen to that I finally couldn't take it anymore. Unfortunately it seems as though she was reading more chapters than anybody else. I'm only being honest, it just ruined the experience for me and I was really disappointed because I was really enjoying the story.

An Analogue at my table

Rivetting! It takes a while to get used to the different readers, but the story is so tight and well imagined that it travels well. I am onto all of ERB's Barsoom books now using LV. I have to say the Southern gentleman reader has the most engaging style. Hard to imagine the author is not known for this science fiction classic. He was far ahead of his time.

always loved the book. now I can listen to it while I'm resting. the core of the series starts here and the rest build from this. I'm not sure how many more books there are but I hope to find them all.

A PRINCESS OF MARS

Never knew this was a book. I was hooked from beginning to end. Just the kind of sci-fi I love. Couldn't wait to get from one chapter to the next. Some of the readers were a little off but its so many different ones its not a big issue.