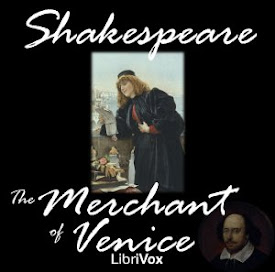 The Merchant of Venice

William Shakespeare's The Merchant of Venice was probably written between 1596 and 1598, and was printed with the comedies in the First Folio of 1623. Bassanio, an impoverished gentleman, uses the credit of his friend, the merchant Antonio, to borrow money from a wealthy Jew, Shylock. Antonio pledges to pay Shylock a pound of flesh if he defaults on the loan, which Bassanio will use to woo a rich heiress, Portia. A subplot concerns the elopement of Shylock's daughter Jessica with a Christian, Bassanio's friend Lorenzo. In its focus on love and marriage, the play shares certain concerns with Shakespeare's other comedies. Yet its depiction of the tensions between Jews and Christians in early modern Venice - and its highly dramatic trial scene in Act 4 - create darker currents in the play. (Summary by Elizabeth Klett)

thank you very much for this book...I can now listen to the book while reading...it helps me concentrate and I remember more!!!

Full Review at https://www.goodreads.com/review/show/1795673092 I am seriously impressed with the quality of this recording. Nearly all of the readers really got into the roles. Shylock's speech in 3.1 was awesome. Actually, all of Shylock's performances were well done. How can anyone not like Portia? She's clever, sarcastic, generous and loyal. Ms. Lipshaw does justice to the character. I was particularly impressed by the song in 3.2, I'm not sure who did the singing but kudos to you. Only 3.5 was completely disappointing. It's supposed to be a light humorous exchange between Jessica, Launcelot the clown, and Lorenzo but most of them just read off the lines mechanically. All the teasing tone is gone. 5.1 was another problem. Aaron Eliot reads Lorenzo and does a technically good job but doesn't seem to connect to the text in any way. It is an uncomfortable conflict to Jessica (read extremely well by Ms Klett) in the same scene. Lorenzo's lines that should be funny are read just like lines that are romantic.

being an icse student it helped me a lot. when it is boring to read text again and again this helps me a lot

Some of the actors spoke too slowly and it was obvious that some did not understand the text they were reading.

well done! thanks to the reader for taking gobs of precious time so we can just sit back and listen. bravo!

I'm too an icse student .. helps me a lot

launcelot's voice was too mechanical and nerissa's too fast