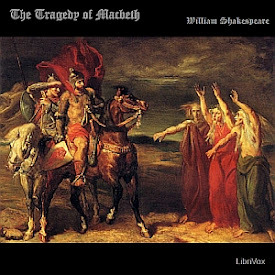 The Tragedy of Macbeth

Murder and madness, witches and war: Librivox presents a recording of Macbeth, perhaps Shakespeare's best known tragedy. Macbeth, a general in King Duncan's army, is given a prophecy by a trio of witches: he himself will become king. Fired by ambition and goaded by his ruthless wife, he murders Duncan and assumes the throne. More killings follow as Macbeth attempts to retain his crown, until he discovers that prophecies are not always what they seem. (Summary by Laurie Anne Walden)

I love this book and it's so great to hear it actually performed! Macduff and Macbeth had such a powerful voice, as did Lady Macbeth.

A great read, particularly Lady Macbeth. A few of the other roles however had rather unclear audios, which is the only reason for the last missing star

Loved it. I think it's awesome. Though some of the people were a little quiet. Other than that it was wonderful.

very good. readers were good, not as good as Hamlet but certainly good enough to keep the story moving. I enjoyed it

Full Macbeth play read by different voices for each character. Good for listening while reading along.

very well read by all parties. enjoyable dramatisation of a classic work. thank you to all readers, and Mr. Shakespeare!

loved the audiobook. well spoken. some what easy to understand.