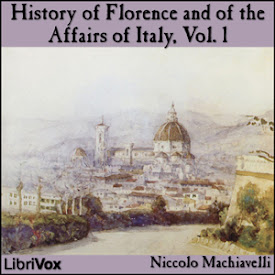 History of Florence and of the Affairs of Italy, Vol. 1

History of Florence and of the Affairs of Italy is an historical account by Niccolò Machiavelli. Toward the end of 1520, the Cardinal Giulio of Medici, later Pope Clement VII, offered Machiavelli the appointment to write a history of Florence. Although Machiavelli was reluctant to accept, accepting was his only way to regain the good graces of the Medici who had regained power and were in a position to offer him employment and protection. Doing the history also provided a way for Machiavelli’s views to become the “official” history of Florentine and Italian affairs. Once completed, the work was presented officially to Giulio, now Pope, in May of 1526. (Summary adapted from Wikipedia by Karen Merline.)

Per Project Gutenberg, this text was taken from a Universal Classics Library edition, published in 1901 by W. Walter Dunne, New York and London. The translator was not named. (8 hr 52 min)

Excelent for any interested in Ancient and Medieval republics. Machiavelli is a vivid historian, and generally even handed, but beware of the portraits of the Medici, because the history was compiled for one of them.