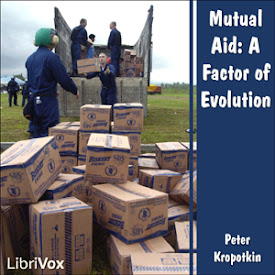 Mutual Aid: A Factor of Evolution

Mutual Aid: A Factor of Evolution is a book by Peter Kropotkin on the subject of mutual aid, written while he was living in exile in England. It was first published by William Heinemann in London in October 1902. The individual chapters had originally been published in 1890-96 as a series of essays in the British monthly literary magazine, Nineteenth Century.

Written partly in response to Social Darwinism and in particular to Thomas H. Huxley's Nineteenth Century essay, "The Struggle for Existence," Kropotkin's book drew on his experiences in scientific expeditions in Siberia to illustrate the phenomenon of cooperation. After examining the evidence of cooperation in nonhuman animals, "savages," "barbarians," in medieval cities, and in modern times, he concludes that cooperation and mutual aid are as important in the evolution of the species as competition and mutual strife, if not more so. (Summary by Wikipedia) (9 hr 28 min)

Mutual aid among the barbarians

Mutual aid in the mediaeval city

Mutual aid amongst ourselves

Mutual aid amongst ourselves (continued)

This audiobook was made from the text of Project Gutenberg at: http://www.gutenberg.org/etext/4341

I wish Enko had a better mic. Despite this he is still able to reach the listener. The scientific basis of the first few chapters is inaccurate in my opinion. For example ants share a lot of the same DNA so it shouldn't be surprising that they are eager to assist each other.

almost impossible to follow, and I'm pretty good at listening to heavy accents. it's not just the accent, it's the terrible syncopation.

the readers diction is monotone and badly timed. The accent and bad mic quality are extra distraction on top of this.

Very difficult to understand reader due to poor quality and thick accent of reader .

Wow.Holy accent. Not even worth listening to for a few sentences. Was this practice for learning how to speak English? Thanks for the effort but no thanks.