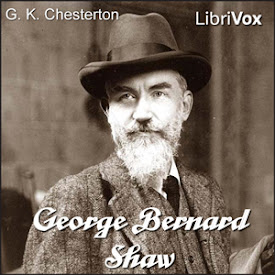 Chesterton and Shaw were famous friends and enjoyed their arguments and discussions. Although rarely in agreement, they both maintained good-will towards and respect for each other. However, in his writing, Chesterton expressed himself very plainly on where they differed and why. In Heretics he writes of Shaw:

“After belabouring a great many people for a great many years for being unprogressive, Mr. Shaw has discovered, with characteristic sense, that it is very doubtful whether any existing human being with two legs can be progressive at all. Having come to doubt whether humanity can be combined with progress, most people, easily pleased, would have elected to abandon progress and remain with humanity. Mr. Shaw, not being easily pleased, decides to throw over humanity with all its limitations and go in for progress for its own sake. If man, as we know him, is incapable of the philosophy of progress, Mr. Shaw asks, not for a new kind of philosophy, but for a new kind of man. It is rather as if a nurse had tried a rather bitter food for some years on a baby, and on discovering that it was not suitable, should not throw away the food and ask for a new food, but throw the baby out of window, and ask for a new baby.”

Shaw represented the new school of thought, humanism, which was rising at the time. Chesterton's views, on the other hand, became increasingly more focused towards the church. In Orthodoxy he writes:

Introduction, Preface, and Chapter 1 The Irishman