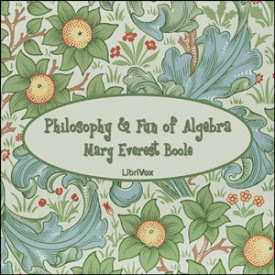 Philosophy and Fun of Algebra

Mary Everest Boole (1832-1916) was born Mary Everest in England and spent her early years in France. She married mathematician George Boole. She was the author of several works on teaching and teaching mathematics in particular.

This short book, Philosophy and Fun of Algebra, is meant to be read by children and introduces algebra and logic. She uses the word “algebra” broadly, defining it as a “method of solving problems by honest confession of one’s ignorance”. Using this definition, Boole introduces, in a conversational manner, the concepts of logic and algebra, illustrating these concepts with stories and anecdotes, often from biblical sources. At times, her discussion seems somewhat mystical, speaking of the imagination and angels as messengers which guide one toward the next step in a logical investigation. Boole ends the book with a reminder that algebra’s essential element is “the habitual registration of the exact limits of one’s knowledge” and a call for the public to keep this principle in mind when encountering any situation. (Summary written by Patricia Oakley) (1 hr 41 min)

01 - From Arithmetic to Algebra

02 - The Making of Algebras

07 - How to Choose Our Hypotheses

08 - The Limits of the Teacher

10 - The Story of a Working Hypothesis

17 - From Bondage to Freedom

The reader is so marvelous, I can almost believe she wrote the book ! I also thoroughly enjoy the author's perspective, separating strictly mathematics with an algebraic look at life overall in general. And whether or not one agrees with her entire premise, or every detail therein: I think it is such good wisdom to remind us all that there are things we know, and things we don't know. We are usually ( or always? ) at our best, when we correctly differentiate the two, and act accordingly (: Thank you so very much! An excellent work, and excellent auditory experience, as well.

Mary’s father was George Boole, inventor of symbolic logic. If only we could get people to skim this very wise lady’s short book, stressing the last two minute chapter, part 18, the appendix. The short course teaches algebra not as manipulation of equations, numbers, or maths, but of concepts. Proper repeated application of rules of logic starting from real data to test a hypothesis leads to conclusions. These can then be used to judge a hypothesis’s truth or falsity. If the conclusions contradict known truth, the hypothesis is rejected. If the conclusions don’t correspond to what is known, the hypothesis can’t be accepted; because there’s no data to make a judgement, only our ignorance. The key to preventing gross mistakes is constantly reminding ourselves of our ignorance at every step of the process. In the appendix, Mary Boole writes most mischief and stupid actions posing as wisdom result from people’s unwillingness to acknowledge their own ignorance when judging, particularly in areas of religion, policy, and politics; when the analysis is often done by the unscrupulous or self serving.

love the book thank you