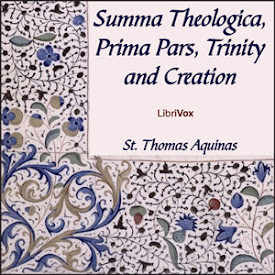 The Summa Theologica (or the Summa Theologiae or simply the Summa, written 1265–1274) is the most famous work of Thomas Aquinas although it was never finished. It was intended as a manual for beginners as a compilation of all of the main theological teachings of that time. It summarizes the reasonings for almost all points of Christian theology in the West, which, before the Protestant Reformation, subsisted solely in the Roman Catholic Church. The Summa's topics follow a cycle: the existence of God, God's creation, Man, Man's purpose, Christ, the Sacraments, and back to God. (Summary adapted from the Wikipedia)

This is part two of six parts of the Pars Prima, consisting of questions regarding the Trinity and Creation. (10 hr 41 min)

27 - The Procession of the Divine Persons

30 - The Plurality of Persons in God

31 - Of What Belongs to the Unity or Plurality in God

32 - The Knowledge of the Divine Persons

39 - Of the Persons in Relation to the Essence

40 - Of the Persons as Compared to the Relations or Properties

41 - Of the Persons in Relation to the Notional Acts

42 - Of Equality and Likeness Among the Divine Persons

43 - The Mission of the Divine Persons

44 - The Procession of Creatures from God, and of the First Cause of All Things

45 - The Mode of Emanation of Things from the First Principle

46 - Of the Beginning of the Duration of Creatures

47 - Of the Distinction of Things in General

48 - The Distinction of Things in Particular

After listening to the first part of Pars Prima, I was hopeful that the quality would continue to be top notch. And i was not disappointed

Great job on reading and recording the text.

A little hard to follow it this way since this requires a lot of thought and reflection.

A Mockery of Aquinas's Work and a Mocking of Those Who Wish To Hear His Work.

I find this extremely offensive on many levels. The culprits in this travesty are all within the church itself--if you go to the Librivox site, you'll find a list of all the accomplices in this disgraceful display. That they chose to have the text read respectfully in all places accept where Aquinas's readers (his audience) ask questions of him says everything about the attitude of those behind this. Let's remember that the West's greatest theologian wrote this. Yet, it is totally ruined by the stunningly sarcastic way in which the reader asks the questions that Aquinas wrote in his book. It's as if the perpetrators of this disgraceful rendition are telling people like me that I'm unwelcome in their club--and that they think anyone who would ask questions is in fact an idiot. Aquinas didn't think so--that's why he wrote the book!! This is such wasted time, and so very very wrong and immoral. If you doubt me, listen to the way the reader asks the questions that Aquinas poses. The answers and the rest of the book are read in a straight-forward manner, but the hostility towards people with questions is obvious. I had looked forward to hearing this. Indeed, I had listened to (as far as I could tolerate it) and reviewed the first section. I checked out the second half (now being months later) to see if perhaps they had realized they were making fools of themselves and had a change of heart. Nope. Absolutely disgraceful!!!