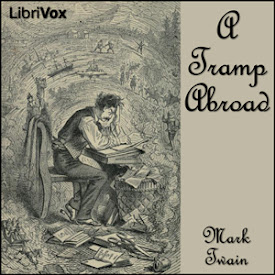 A Tramp Abroad is a work of non-fiction travel literature by American author Mark Twain, published in 1880. The book details a journey by the author, with his friend Harris (a character created for the book, and based on his closest friend, Joseph Twichell), through central and southern Europe. While the stated goal of the journey is to walk most of the way, the men find themselves using other forms of transport as they traverse the continent. The book is often thought to be an unofficial sequel to an earlier Twain travel book, The Innocents Abroad.

As the two men make their way through Germany, the Alps, and Italy, they encounter situations made all the more humorous by their reactions to them. The narrator (Twain) plays the part of the American tourist of the time, believing that he understands all that he sees, but in reality understanding none of it. (Summary by Wikipedia) (15 hr 46 min)

01 - CHAPTER I [The Knighted Knave of Bergen]

CHAPTER V At the Students' Dueling-Ground [Dueling by Wholesale]

CHAPTER XI [I Paint a "Turner"]

CHAPTER XII [What the Wives Saved]

CHAPTER XIII [My Long Crawl in the Dark]

CHAPTER XIV [Rafting Down the Neckar]

CHAPTER XVI An Ancient Legend of the Rhine [The Lorelei]

CHAPTER XXII [The Black Forest and Its Treasures]

CHAPTER XXIV [I Protect the Empress of Germany]

CHAPTER XXVI [The Nest of the Cuckoo-clock]

CHAPTER XXVIII [The Jodel and Its Native Wilds]

CHAPTER XXXII [The Jungfrau, the Bride, and the Piano]

CHAPTER XXXIX [We Travel by Glacier]

[Chillon has a Nice, Roomy Dungeon]

[Meeting a Hog on a Precipice]

[Beauty of Women--and of Old Masters]

[Hanged with a Golden Rope]

APPENDIX A The Portier

APPENDIX E Legend of the Castles

Twain and an imaginary friend "tramp" Central Europe by train.

Not quite a page-turner on the level of Twain's "Life on the Mississippi" and "Following the Equator." Nevertheless it is a worthy 19th century travelogue spiced with humor. (You do get hear a lot about people falling off the Alps.) An excellent reader made the download worthwhile.

Definitely not "Tom Sawyer." This is a longer work and at times a bit tedious.

Herr Greenman, you again read wonderful! This book has to be my favorite. I admit it, without hesitation, I am german! Mr. Twain had me in tears, due to his simply divine descriptions and his absolute genius when telling a story. I myself had the fortune to see the illumination of Heidelberg, just a few years later, namely 1987. It was and still is a must see and utterly spectacular! Thank you for the privilege to listen to this book!

Best Stores of Mark Twain Yet!

I find this Tramp account to be the most enjoyable of Twain's work. I wish he'd used this style in other stories, which tend to become laborious. Even though the sound quality is somewhat distorted because of too high a level, it's still the very best story style of Twain. Thanks for sharing!

John Greenman, thank you. I was curious about MT and dipped into one of his books. Happily, it was narrated by John and I was hooked. What a talent! What intelligence! What warmth! And now I'm exhausting the catalogue and having the time of my life.

it was a great story. but the part where he helped a man get ready for a "battle to the death, that was dumb. why would anybody in his right mind help somebody get ready to die. he should help preserve life, not destroy it. 😐😐

Mr. Greenman wonderfully narrated entire story again. This Mark Twain's travel journal was very informative and entertaining. I am sure that Mark Twain in the heaven appreciates Mr. Greenman's effort to spread his work to vast audience. Thank you, Mr. Greenmsn.