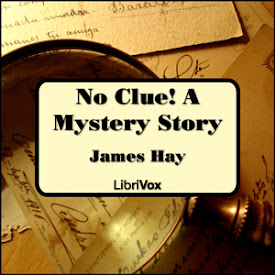 No Clue! A Mystery Story

“No Clue! A Mystery Story” finds detective Jefferson Hastings at the home of wealthy but eccentric Arthur Sloane one hot summer night, when two other guests at Sloanehurst stumble across the body of young Mildred Brace lying dead on the lawn. Sloane’s daughter Lucille asks Hastings to help solve the crime, but Hastings gets surprisingly little help from anybody he interviews, including Mr. Sloane himself and even the mother of the victim. With few clues to aid him and nobody beyond suspicion, including himself, seemingly rock solid alibis begin to fall apart, expanding the list of potential suspects, and Hastings must rely on subtle expressions and the scant evidence at hand to try to solve the murder. (Summary by Roger Melin) (7 hr 15 min)

05 - The Interview With Mrs. Brace

09 - The Breaking Down of Webster

I liked this book...

and I have listened to it 2x. The owner of the house, Slone, is a riot, his exclamations and whiney tendencies were very funny. A young woman is found murdered on Slone's lawn, and as it happens, he is a fan of detecting and has Detective Hastings over for a visit at that time. At Slone's daughter's insistence, Hastings begins investigating the murder. Slone doesn't like this idea tho, and tries to get rid of him. What is Slone hiding? Who is the real killer? Good story, likeable characters. Roger Melin is a good reader, I enjoy listening to his books.

This is a better than average Who-Done-It. The plot moves right along and maintains the listeners attention for the most part. The ending is somewhat prediable, but There really aren't many plausible suspects to begin with. The reader is very professional and reads extremely well....A five star reader with a three star novel. Four Stars overall. _

An interesting book with interesting characters. Although I was a little disappointed that Mrs. Brace's history was not gone into more. I wanted to know why she was as she was. Reader was excellent.

I would say a three star book with a 5 star reader as well. The story is interesting enough to keep you waiting to find out "who done it", but even that to me was a bit odd in how it was written. I probably would not have enjoyed this book as much if it had been read by anyone other than the wonderful Roger Melin. He is what kept me listening.

Some people might consider this story too slow, but the pace gives reality to a very difficult case for Hastings to solve. Great read. It is unfortunate that the author has no other books available.

one of my favorite readers

pretty good book. it spends too much time on sloan and Lucille's secret, not on the evidence that apparently gives hastings glimps to the murderer.

good for a rainy day

The reader was excellent. The plot held my interest and I enjoyed the the detective ‘s character. Good to see an “old” guy win.

Well read Roger M. Story had plenty of twists and turns for me. Enjoyed the detective character and his tendency to wattles when thinking.