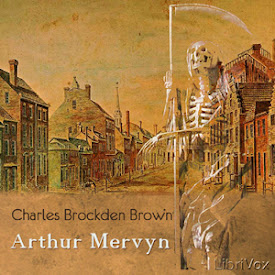 Arthur Mervyn is the story of a young man from the country who arrives in a city stricken with Yellow Fever. He soon comes down with the illness and is rescued by a kindly doctor. Arthur tells the doctor and his wife the story of his life, thereby gaining the doctor’s confidence and good will. However, others familiar with Arthur tell another tale, and the doctor’s as well as the reader’s confidence in Arthur is shaken. Brown, who himself contracted Yellow Fever during an outbreak in New York City, vividly describes the horrors of the disease and its effects on an early American city. (Summary by Margaret) (17 hr 29 min)

was really enjoying until...

certain racially charged scenes ruined my good time. the author definitely had some unfortunate ideas about white superiority. this is obviously pretty par for the course for the era but still, be aware going in. other than that the first act was engaging and grim in a delightful way.. the ending was a little more saccharine than i was hoping for but still fun.

A very interesting American Gothic, and a very good text to use when describing an unreliable narrator.