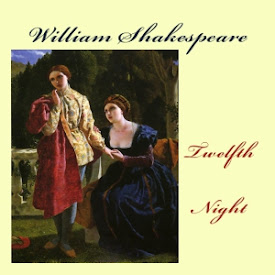 Hidden and mistaken identities, requited and unrequited loves, pranks and jokes abound in this romantic comedy. (Summary by Karen Savage)

the voice actors were simply wondeful. it felt as if i was right there watching them preform on stage. this really helped me to visualise the play for my english class, thank you.

Stars for recording not text

This was such a wonderful listen! Malvolio kind of stole the show with his incredible delivery. This was also the best audio editing I've heard on LibriVox. There's appropriate background noise, like when they're near the sea you can hear seagulls. While I think this a pretty pathetic play, not at all at Shakespeare's usual standard I do really like Viola's character. She has just survived a shipwreck and is alone in a new country but she contrives a plan to prosper, even though it entails acting unconventionally. She is so agreeable that though she's new to the Duke's service he has become very fond of her as Cesario. She acts with honor in dealing with Lady Olivia and even when she's challenged to a duel by Sir Toby and Sir Andrew. It's hard not to feel bad for her in the last scene when everyone yells at her for something.

The actors did a spectacular job with this recording. There were moments I was literally laughing out loud and other times I was really moved to pity (with Malvolio for instance). I particularly liked Maria’s performance. Well done all around!

I loved the story! The play was hilarious at times. A few of the readers were a bit monotone, but overall it was a good listen. I particularly liked Viola & Feste’s voicings.

Shakespeare does it again jk

A classic and amazing play written by no other than Shakespeare his self. This play is a play of many humorous scenes (and acts)!! A hands down great play!!!!!

Generally a good reading. The readers for Viola and Sebastian both spoke too fast, so they were difficult to understand. In contrast, the Olivia was perfect.

well done by all readers. a Shakespearean classic, one of my favorites. malvolios was a tip top performance. very enjoyable listening experience

Nicely read but a few of the voices were somewhat mechanical. My favorite was the Clown.