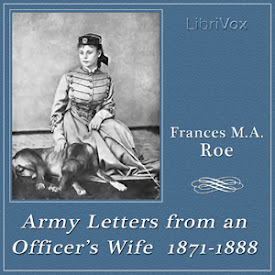 "There appeared from the bushes in front of me, and right in the path, two immense gray wolves . . . Rollo saw them and stopped instantly, giving deep sighs, preparing to snort, I knew . . . To give myself courage, I talked to the horse, slowly turning him around . . . when out of the bushes in front of us, there came a third wolf! The situation was not pleasant and without stopping to think, I said ‘Rollo, we must run him down - now do your best’ and taking a firm hold of the bridle, and bracing myself in the saddle, I struck the horse with my whip and gave an awful scream. . .”

Thus, the spunky and resourceful Frances Roe recounts one of her many adventures. Frances was the young wife of a West Point Army officer, whose career took them both to frontier garrisons in what are now the states of Kansas, Colorado, Oklahoma, Utah, Montana, and Wyoming. Her letters home to her family in upstate New York, written between 1871 and 1888, and published in book form in 1909, are a fascinating chronicle of life on the frontier. Despite the grittiness of keeping house in tent-and-log-cabin quarters, Frances took to Western life, learning to shoot and ride (side saddle), fly fish for trout and hunt buffalo. Her letters, chatty and detailed, open windows on varied aspects of frontier and army life: army protocol (including the right of senior officers to bump subordinates out of their housing ); the Indian tribes--Arapahoe, Cheyenne, Apache, Kiowa (ceremonial visits from chiefs as well as Indian warfare); the black cavalry troops (at Camp Supply in Indian Territory); Chinese cooks (also Polish, Irish, and enlisted men doing kitchen duty). Her letters span years of rapid change in the West. They touch on the disappearance of the buffalo herds, the decline of the Indian tribes and the coming of the railroads. Even Yellowstone Park, established in 1872, gets a mention: “Now that the park can be reached by railroad, all of the generals, congressmen, and judges are seized with a desire to inspect it--in other words, it gives them a fine excuse for an outing at Uncle Sam’s expense.”

Her emotions run deep when she writes: “I love army life here in the West, and I love all the things that it brings to me--the grand mountains, the plains, and the fine hunting.” But, Frances’ husband, Fayette Washington Roe, is eventually promoted to a headquarters desk job. Frances tries to evinse enthusiasm for town life: “since I cannot return to the plains, I might as well go to the city, where we will meet people of culture.” But even shopping for the necessary clothes distresses her: “Parasols have bothered me. I would forget to open them in the street, and would invariably leave them in the stores when shopping and then have to go about looking them up.” She then utters a timeless cry of urban angst: “It is the feeling of loneliness I mind here--of being lost and no one to search for me.” (written at a hotel in Omaha, Nebraska in August 1888) Anyone with nostalgia for or curiosity about the Old American West will certainly enjoy this book. (Summary by Sue Anderson) (11 hr 36 min)

Interesting and a question for the narrator

The story was very interesting from a historical standpoint. The descriptions of life on the frontier were exceptional. I thought the end was a bit abrupt but then they were letters. The narrator was truly excellent; however, I was confused about the reference to Mrs. Ray. She pronounced Francis Roe in the librox spiel but in the book she referred to Mrs. Ray. I am just confused and it is not a criticism. Just wondering why. I thought this reader did a wonderful job of bringing the character to life. The books is not for those who are very sensitive to wording that would not be politically correct in our day. You must simply understand it in the context of the letters and those times. (Does not mean it was right to say those things either.) It does however show how differently people thought about other races and "foreigners" in those early days of America. I recommend this if you like history.

What a wonderful set of letters. From being newly wed Francis describes military life in camp. Living through the demise of the buffalo, learning to become an excellent rider and on through the years of life on the plains. She clearly loved it all. The narrator Sue Anderson reads it beautifully. Thank you. I love social history so followed it up to find the rest of their history and also photos of both Francis and Fayette. I totally enjoyed the glimpse into their lives and was sad when they moved East and the letters ended.

This book is extraordinary. The reader is wonderful. The descriptions of camp life are a real eye-opener (imagine having to pack up your tent, every day, before 6am, in the dark!). She takes everything in her stride and is wonderfully imperious about how she treats her servants (although, of course, seen through modern eyes, her behaviour is unacceptable). A very enjoyable book and reader. The only sad thing is the dearth of information available about the author online, she seems to have been largely forgotten by history, despite her invaluable recordings of events. Highly recommended

The truthful tales are always interesting and enjoyable without the factor of rolling your eyes at the improbability and far fetchedness of fictitious adventures. Reader did a good job too

An Enjoyably Persoal Glimpe Back In Time

An entertaining and historical look at military life in Western front from the pen of a military wife.

The reader is excellent and the letters a treasure. I only wish there were more of them