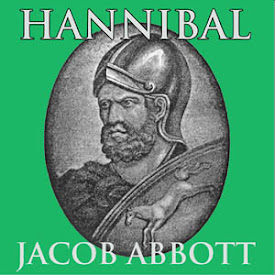 There are certain names which are familiar, as names, to all mankind; and every person who seeks for any degree of mental cultivation, feels desirous of informing himself of the leading outlines of their history, that he may know, in brief, what it was in their characters or their doings which has given them so widely-extended a fame. Consequently, great historical names alone are selected; and it has been the writer's aim to present the prominent and leading traits in their characters, and all the important events in their lives, in a bold and free manner, and yet in the plain and simple language which is so obviously required in works which aim at permanent and practical usefulness. This volume is dedicated to Hannibal. (Summary from the preface of the book) (6 hr 11 min)

Opening of the Second Punic War

The Passage of the Rhone

Hannibal in the North of Italy

The Battle of Cannae

Hannibal a Fugitive and an Exile

The Destruction of Carthage

Was excited for another Abbott book but how is this read in broken English?! The words are there. Fully. I understand they want to practice English but please read in your own language or practice to yourself more. Also that one non speaking reader sighing loudly the whole time. You know this isn't mandatory right? Don't read if you're so annoyed over it. And who is oking these readings? I know they have to be proof listened to. I would have not okay'd most of these characters

Very good story, difficult to follow some of the readers.

All wars and struggles are caused by unequal power dynamics and the oppression on nonbinary BIPOCs by white male oppressors. The problem is Hannibal thought he was waging war against Rome to take their land and women In actuality Hannibal was waging war because the evil cis gendered Roman's were forcing their eurocentric phalogocentric world view on the nonbinary Carthaginians of color. The fact Hannibal refused to realize the causes of his war means he lost it. Hannibal was blind to his true nature as a transgendered female lesbian. Rome could not be conquered militarily. It can only be conqured by critical race theory and gay orgies. Since his attempted conquest of Rome failed to realize this, I can only give his attempted conquest 3 stars. Rather than bringing elephants across the Alps, he should have just filatiated the elephants in Spain. That would be a true cause of celebration for all worthy justice warriors.

An excellent story, glad for the audio book version. Some mispronounced words in the last chapter, slightly annoying, but not enough to stop listening.

<br />In the mid-19th century, <a href="http://en.wikipedia.org/wiki/Jacob_Abbott" rel="nofollow">Jacob Abbott</a> (1803-1879) wrote a series of biographies as an introduction to famous men and women in history such as Alexander the Great, Cleopatra, etc.. ostensibly for children, but also appealing to adults. His books do one thing very well, and that is tell a dramatic story in a compelling narrative. His biography of <i>Hannibal</i> is factually accurate in terms of the events, based as it is on ancient texts like that by Livy, it is comparable to Gibbon in style, though not nearly as detailed. Modern critics will rightly point to Abbott's antiquated Victorian-era morality lessons, but I think it provides a certain warm grandfatherly charm, and unintended humor. In any case it's easy to overlook Abbott's occasional commentary for the sake of the narrative of events. <i>Hannibal</i> focuses on the Second Punic War, the one in which Hannibal famously crossed the Alps with war elephants. The First and Third Punic War are covered in the first and last chapter by way of summary. This account is mostly a biography of Hannibal and so skims over other famous scenes and characters, but Hannibal was the Napoleon/Alexander of his day and thus the central figure of the Punic Wars. If you've only heard of Hannibal and want to know why he is so famous without reading Livy or a longer book this is a great way to go. Although there are some better modern books of this type, like by Harold Lamb <a href="http://www.librarything.com/tag/hannibal" rel="nofollow">and others</a>, this one is free online and has an audio version. The <a href="http://www.archive.org/details/hannibal_1004_librivox" rel="nofollow">LibriVox recording</a> is well done, see also the map and engravings in the <a href="http://www.archive.org/details/hannibal00abboiala" rel="nofollow">original book</a>. [STB, 883, 04.2010]

The great antagonist of Rome explained

Very interesting book about one of the lesser known generals of the ancient world. The great distraction is the multiple mispronoumciations. Many are by what appears to be ESL students, but many are by those for whom English is their native tongue. If you're not sure, look it up!

I enjoyed every minute of this book. it seemed like it might have been written for young people, but was still very good. I liked the last reader, he had a very pleasant voice, good pacing and enunciation and the few mispronunciations actually made me smile