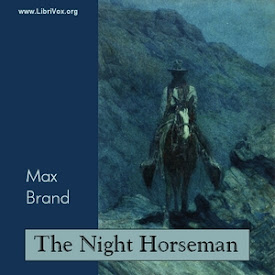 A man, a dog, and a horse. The call of the wild geese. A very smart doctor from the east who finds there is a lot to learn from these desert people. A woman loved by three men. A gunslinger who has a debt to settle. Max Brand brings them all together in another one of his over three hundred exciting western tales. Brand is not your typical western writer.(Summary by rkilmer) (9 hr 48 min)

24 - Doctor Byrne Looks Into The Past

42 - The Journey Into Night

Well narrated by someone who sounds like he lived in the old west and was wearing his cowboy boots and hat while telling a familiar story in his deep, mature voice. The first "review" gave an overview of the ingredients in :the plot. The style of the novel was a slow, moseying tale with lengthy descriptions of people, fights, rivers, the horse, the wolf/dog, and so on. No surprising twists or turns, or deep subplots, just a

1st of all, the person who stated that this book was fantasy and not a good western is likely a young, experience. lacking, spoiled, soft individual, who never had a callous. basically, callow. 're: the book, it was very good. the 1st was the best and. the next 2 were not as good but they were still very good. I'm just getting into western and brand and Zane grey are wonderful. whistling. Dan is a awesome character. and I hope there are more books to find that are as entertaining. I recommend. spirit of boarder, the last trail, lone star ranger and riders of the purple. sage by z grey and bull Hunter, way of the lawless, trailing,

The Night Horseman...not his best

I enjoyed this second book in the "Whistlin' Dan" series, though not nearly as much as the first. The author treated the characters differently than he did in the 1st - sometimes it was very strange. Only Buck Daniels was similar to who he was in the 1st book, I liked him still.

If Richard Kilmer narrates more of these I will download them all. He is a wonderful narrator and he made the story very entertaining. His narration brought to life the very beautiful and often lyrical writing of this author. The characters are so well written you feel like you know them. The character of Dan Barry (sp) really bothered me in a lot of ways and when he has a confrontation with Buck Daniels you realize how Dan is so much more nature and animal than human with a soul. I Enjoyed this story and will look for more by this author and narrator.

I didn't like this story, it was depressing. And yes I like westerns, watch them all the time, but this was just blah to me. There is no clear hero, just a bit of an idiot tough guy who has issues with geese and getting slapped. The chick who is in love with him is likewise an idiot who allows herself to be bullied into riding off into the sunset with the 'hero' which basically finishes off her dying father. Excellent reader tho, he has a great slight drawl that works well with the theme of the story. I just didn't care for the story.

Thanks to all at Librivox for another very worthwhile listen. Max Brand clearly had a good handle on and was able breathe life into a whole range of personality types, and these were brought to life for me compellingly and disturbingly by Richard Kilmer's measured narration. Thank you, Richard. My career paths have led me into contact with some very complex and/or dark personalities. I was often helped in my dealings with them by the availability of a well-documented psychological profile. I found myself wishing again and again that I had one for Whistlin' Dan Barry!

I can see how this might not appeal to the classical western fan, who like stories with heroes and villains and Good vs. Evil, with a happy ending. Brand elevates the western to a more mystical level. His character Whistlin' Dan could be a werewolf, with his affinity to animals and hatred of the indoors. I found this tale quite spooky. Brand also throws in a fine facility for turning a phrase. "Let each day bury its dead."

not a great western story. reads more like something in the style of HP Lovecraft. the structure is overly wordy (as books of that era tend to be), very discriptive of the scene but with the feeling that the author sees but doesn't understand the people places and animals he is writing about. it feels like the author is well to do from nyc and decided to write a book after vacationing on in the west