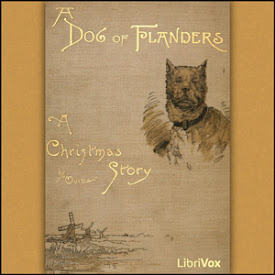 A Dog of Flanders

"Nello and Patrasche were left all alone in the world." So begins the poignant story of the two orphans who were to become inseparable companions. They were Nello, an orphaned youth, and Patrasche, the dog which he and his grandfather saved from near death one day. The tale takes place outside of Antwerp, and so popular has this story become that there is a commemorative statue of Nello and Patrasche standing in the village yet today. The story is powerful, and masterfully written by Marie Louise de la Ramée under the pseudonym Ouida. (Summary by Roger Melin) (1 hr 52 min)

A Dog of Flanders

<br /><i>A Dog of Flanders: A Christmas Story</i> is a young adult book written by the Victorian English author Marie Louise de la Ramée (aka "Ouida"). It's a sentimental animal fable, part of her lifelong campaign to draw attention to the problem of cruelty to dogs. It's set in Flanders where dogs are routinely worked to death. I found the story pleasant and emotionally moving. It can be overly sentimental in that Victorian way, and has some Romantic Nationalism, but the story is good and leaves one with a positive feeling in the end. Although Ouida wrote over 40 novels and was very popular in her time, she is hardly read anymore, this childrens books now appears to be the most popular of her works. But in her time her most famous work was <i>Under Two Flags</i> (1867), which was still being published and read in the 20th century, including 4 different movie adaptations. Likewise <i>A Dog of Flanders</i> seems to have inspired at least 7 movies, as recently as 1999. It also sells well in Japan. See also the book which has a lot of original artwork: <a href="http://www.archive.org/details/dogofflanderschr00ouid" rel="nofollow"><i>A Dog of Flanders: A Christmas Story</i></a>. ---- Roger Melin's LibriVox reading is very good and appropriate for the story, it's at a professional level. My only complaint is I wish Roger would not (try to) raise the pitch of his baritone voice to sound like a woman or little boy when reading dialogue :) [STB, 12-18-09, 287]

Five stars for one of my favorite readers, Roger Melin. Four stars for a good dog story. Minus two stars for making me cry even while I despised the morass of pathos the book devolved into. Minus half a star for calling it a Christmas story. Really?! Here's where I'd put a new paragraph if my iPad let me. I don't want to reveal too much, but I think you should be warned- I wish I was- that the ending could have been written by Hans Christian Anderson. If he's not familiar, let me explain: remember his famous story The Match Girl? Here's the plot: a poor, cold, friendless girl tries to keep life and soul together by selling matches (to disguise her begging from the authorities). She fails, dying alone in the snow. The End. How about The Little Mermaid? You know how it really ends? She doesn't get the guy. She doesn't find love and happiness. She dies. But Anderson sets it up as a happy ending. How? SHE GOES TO PURGATORY INSTEAD OF HELL. You've been warned.

I'm not a literary critic - for me this was simply a lovely children's story about a boy and his dog and the bond of friendship between them. It is a solo recording by Roger Melin and very well done. Caution: The next review (from stbalbach) contains a spoiler.

This story has a great moral. Never look down on someone who has less money than yourself. Love, honesty, integrity, etc., has a wealth far greater than all the money in the world. The reader is superb!!

about the best story I've heard on here. and beautifully read

reminded me of perriot and really enjoyed .

one of my favorite readers