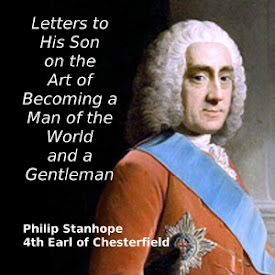 Philip Stanhope, Earl of Chesterfield, was at one time Ambassador to the Hague, negotiated the second Treaty of Vienna, was a founding governor of London’s Foundling Hospital, Lord-Lieutenant of Ireland, and Secretary of State. Having no legitimate children, his heir was his third cousin (another Philip) whom he adopted. Although known as a hard, calculating man, he is most well known for his letters to his natural son (i.e., illegitimate son) (also called Philip). When Philip died in 1768, the letters are addressed to his grandchildren (Philip’s two sons, Charles, and, yes, Philip!). (Sibella Denton)

From the introduction: “The proud Lord Chesterfield would have turned in his grave had he known that he was to go down to posterity as a teacher and preacher of the gospel of not grace, but—"the graces, the graces, the graces." Natural gifts, social status, open opportunities, and his ambition, all conspired to destine him for high statesmanship. If anything was lacking in his qualifications, he had the pluck and good sense to work hard and persistently until the deficiency was made up. Something remained lacking, and not all his consummate mastery of arts could conceal that conspicuous want,—the want of heart.

Teacher and preacher he assuredly is, and long will be, yet no thanks are his due from a posterity of the common people whom he so sublimely despised. His pious mission was not to raise the level of the multitude, but to lift a single individual upon a pedestal so high that his lowly origin should not betray itself. That individual was his, Lord Chesterfield's, illegitimate son, whose inferior blood should be given the true blue hue by concentrating upon him all the externals of aristocratic education.” (28 hr 35 min)