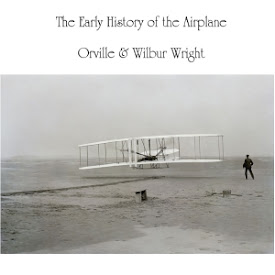 The Early History of the Airplane

The Brothers Orville and Wilbur Wright made the first controlled, powered and sustained heavier-than-air flight, on 17th December 1903. They were not the first to build and fly aircraft, but they invented the controls that were necessary for a pilot to steer the aircraft, which made fixed wing powered flight possible. The Early History of the Airplane consists of three short essays about the beginnings of human flight. The second essay retells the first flight: This flight lasted only 12 seconds, but it was nevertheless the first in the history of the world in which a machine carrying a man had raised itself by its own power into the air in full flight, had sailed forward without reduction of speed and had finally landed at a point as high as that from which it started. (Introduction by Availle) (1 hr 33 min)

How We Made the First Flight

The Early History of the Airplane

<br /><i>The Early History of the Airplane</i> is a 1922 pamphlet composed of three reprinted magazine articles by the Wright brothers: "The Wright Brothers' Aeroplane", <i>Century Magazine</i>, Sept. 1908, Orville and Wilbur Wright "How We Made the First Flight", <i>Flying</i>, Dec. 1913, Orville Wright "Some Aeronautical Experiments", Wilbur Wright, speech given in 1901 The last article, "Some Aeronautical Experiments", is the most historically important, it is based on a speech given by Wilbur a few years before the first flight while still working with gliders. In the early years of the 20th century it was eagerly studied by would-be aviators and reprinted countless times. It went on to become the "Book of Genesis" of 20th century aeronautical technical literature. Although highly technical and now outdated it is sort of like listening to a steam-punk scientist. The first article, "The Wright Brothers' Aeroplane", was commissioned by <i>Century Magazine</i> as an exclusive account of the first flight on December 17, 1903, it would take the brothers four years to write. Listened to via <a href="http://www.archive.org/details/early_history_airplane_1003_librivox" rel="nofollow">LibriVox</a>. Original pamphlet at <a href="http://www.archive.org/details/earlyhistoryofai00wrigrich" rel="nofollow">Internet Archive</a>. [STB | 062010 | 336] <b>Response to Sorker</b> Sorker, you've made a few decent reviews on IA, so I assume this is another of your "having a bad day" aberrations. Your at your best with positive constructive criticism, and at your work when unfairly attacking people. Unlike you, I listened to the entire book before commenting. I spent time researching the books history (no, it's not on Wikipedia or anywhere else easily found). I then shared what I found for the benefit of all, including apparently you. I discovered the third article's historical importance, and thus gave it 4-stars (now 5). Perhaps you would like to weigh in on this creaky old historical document's aesthetic and artistic merits - after you've actually read it in your own preferred voice of course. Unlike you, I have no problem listening to female readers narrating male authors. The reader here does a good job for anyone genuinely interested in the Wright Brothers.

Marked down for being read by woman with a heavy Nordic accent. Nothing personal but, for me, it's distracting to concentrate hard enough to interpret the accent and so the piece is just not listenable for me. I give this 2 stars, and that only because of the historic nature of the text, which you can read at http://www.archive.org/details/earlyhistoryofai00wrigrich Later added: @stbalbach: Thank you for adding some input as to why you rank the piece as you do. Especially inportant is that you do not mind the accent or sex and I do; you are not alone but I cannot join you. I also appreciate your providing background; that's good info for readers of reviews. I have "trimmed" my review to be specific and have taken that chill pill you offered. BTW, I own an original first edition of "The Year of the Century" from 1907, is which is detailed, inter alia, the statistics (almost like a sport) of every significant airplane flight ever made to the time. It also has a great article on an expanding sport called "base-ball". "The Century" magazine can be a great source for good material.

This was so fascinating, highest recommendation. Those other reviewers: Man, & I thought *I* was a whiner! I totally disagree - I could not fault the reader for anything, even in my worst nit-picky moods.

I find the reader Availle's accent fascinating. I could listen to her all day. Check out her reading of Columbus voyages. Good subject here too. I read the book.

first hand info about a development in technology thata has changedhuman life - and life on our planet. I like Availle's reading :-)

Fun read for the road if you are in to planes