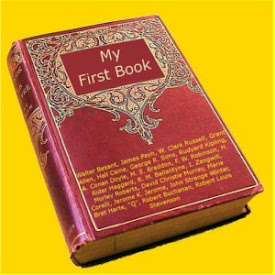 This is not a children's book, as may be supposed from the title, but a collection of essays first published in The Idler magazine, in which over twenty well-known authors write with characteristic style and humour of their experiences in writing their first book... and getting it published.

Authors include Jerome K. Jerome, R. L. Stevenson, Bret Harte, Rider Haggard, Rudyard Kipling, Conan Doyle and Mary Braddon. Full of charm, humour and pathos, this book is like a fireside chat with great writers of the past, as well as being a fascinating insight into the literary scene of the late 19th century.

The listener is warned that a few of the authors give away the ending of their book, especially when they were pressurised into changing it by the publisher.
.
Here are links to online texts of the works discussed, where available:
Ready-Money Mortiboy;
The Family Scapegrace;
The Wreck of the ‘Grosvenor’;
Physiological Aesthetics;
Philistia;
The Shadow of a Crime;
Departmental Ditties;
The Trail of the Serpent;
The House of Elmore;
Dawn;
Hudson Bay;
The Premier and the Painter;
The Western Avernus;
A Life’s Atonement;
A Romance of Two Worlds;
On the Stage and Off;
Cavalry Life;
Dead Man’s Rock;
Undertones;
Idyls and Legends of Inverburn;
Treasure Island

The Wreck of the Grosvenor

The Shadow of a Crime

The Trail of the Serpent

The House of Elmore

The Premier and the Painter

A Romance of Two Worlds

On the Stage and Off

Undertones and Idyls and Legends of Inverburn

Very enjoyable to listen to the struggles (or not-so-struggles) of many familiar Victorian authors. They each write in their own style; some are philosophical, some are very chronological; some are in their own world. RuthieG is, as always, excellent. I'm unsure why she didn't read the entire book but left two chapters to Patti Cunningham, but that's OK. Patti is a good reader as well. Most of the books discussed aren't in the LibriVox catalog as yet. In fact, the chapters of this book is the sole LV work for a few of these authors. It would be fun to have them all recorded and referenced in this summary. (The texts themselves are linked on the LibriVox catalog page.) Someone? Anyone? :)

Although the subjects are interesting, narrator Ruth Golding has not yet attained an interesting or palpable reading voice for this setting. She needs to look up and apply, “inflection, cadence, monotone, pronunciation, enunciation, emphasis, syllable, theatrical reading.” Simply awful and painful to listen to.

Some of the authors were only PD in the USA - so 2 readers were needed.