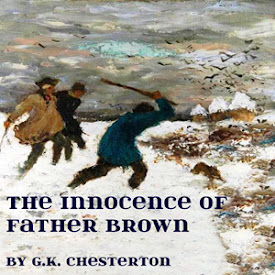 The Innocence of Father Brown

The Innocence of Father Brown (1911) is the first of five collections of mystery stories by G. K. Chesterton starring an unimposing but surprisingly capable Roman Catholic priest. Father Brown's ability to uncover the truth behind the mystery continually surpasses that of the "experts" around him, who are fooled into underestimation by the priest's unimpressive outward appearance and, often, by their own prejudices about Christianity. Combining captivating stories and insightful commentary, The Innocence of Father Brown is a delightful read. (Summary by Brian Roberg) (10 hr 23 min)

08 - The Sins of Prince Saradine

the innocence of father brown

The stories were very well written, and the reader had a clear voice that was easy to understand. If you like mysteries, Father Brown is a good one to listen to!

When reading absolutely anything written by Chesterton it may be helpful to keep five things in mind: Chesterton is always affirming his Catholic faith. Chesterton relentlessly defends liberty and the right for as many people as possible to own the means of making a living (Distributism) Chesterton consistently defends marriage and family. Chesterton loves the use of paradox. Chesterton is not above exaggerating a point, to make a point. Having read a considerable amount of Chesterton, I feel confident that the Mussolini comments were yet another use of paradox. He was making a point about his own government, which affirmed liberty, yet did not always act in the interest of the common man. Also remember that Chesterton was among the earlier writers to warn about Hitler. Read 'Orthodoxy', 'Eugenics And Other Evils' and 'What's Wrong With This World' and there can be no doubt about where he is coming from. Having said all that I must admit that the Father Brown stories are not my favorite Chesterton fiction. I much prefer his novels such as 'The Man Who Was Thursday', 'Manalive' and 'The Ball and the Cross'. Even when not at his best, though, Chesterton is definitely worth reading.

Curious short stories, wonderfully read. an interesting take on the detective fiction genre; some of the stories are a little bizarre, but I still enjoyed the journey. I am new to Chesterton; I also have reservations on his views of non-Europeans and non-Catholics but I still enjoyed this detective's meandering observational style and Chesterton's way with words. thank you to the reader who I found narrated this well.

Chesterton's Father Brown stories are somewhat disappointing if you approach them as simple mystery stories. The situations are a little artificial and even improbable. They are really thought experiments, ways of making a point about human thinking (mostly about how our ideas are usually not very well thought out and based on uncritically accepted assumptions). The more I read the stories, the more I get out of them and I find that, unlike typical mysteries, they continue to provide more and more enjoyment even after one knows the solution (knowing the solution helps to understand the point Chesterton is making as he sets everything up for the denouement). This reading was perfect--easy to understand, and with perfect timing, the pauses giving you time to think and absorb the ideas presented by the author.

I first became acquainted with Father Brown through the TV series, but as usual, the book is so much better. I like the thought processes of Father Brown and the religious beliefs he shares. I'm looking forward to reading more Father Brown and more G. K. Chesterton.

five stars for the Father Brown stories. the reader is a bit too slow and mispronounces the simplest English words such as "brow" and "island." He also stumbles over some of the sentences and the result is disjointed phrases that are difficult to understand.

These stories are widely believed to only be enjoyable to Christian readers/listeners. As a Christian, I can't say for sure, but I don't believe that's true! While Father Brown is CLEARLY a religious figure (I mean, look at that "Father" bit), this doesn't make it inaccessible for people with different/no religion(s). The stories and the actual discovering of the culprit are always fascinating and very enjoyable, much like reading Sherlock Holmes. The publishing date of 1911 makes clear that there will be racist attitudes. In at least one Father Brown story, one may actually be in this collection, that most unfortunate of words, the N-Word, is used in reference to a Black man who is suspected of committing a crime... interestingly, Father Brown's "sidekick," Flambeau, is a great character, and is probably just as good a character as Doyle's Watson ever was! The reader had a strange way of pronouncing some words, but you get used to it, although the actual words he mispronounces are often easy enough to pronounce correctly, which add admittedly left me confused sometimes. Well, I'm getting tired of writing this review, so let me sum it all up in seven words; pretty good, four and a half stars.

I like Father Brown. He may let the criminals go, but they either reform, confess, or come to a sad end. I also disagree with the first reviewer. Chesterton pretty much insults everyone, not just Eastern culture. Presbyterians, Calvinists, atheists, Christian Science - all come under his censure in some degree. And that's fine with me - he's not writing a religious or cultural tome here. I find the stories very enjoyable and have no problem with the resolutions. They're not as deep and intricate as crime novels, certainly - and the reformation of the criminals at Father Brown's sermons to them does seem a bit forced. But if you're looking for your pet peeve, you'll probably find it... so don't bother looking and just enjoy. The reader is good, but I find him a little slow and ponderous at times. It takes all kinds of readers to please everyone at least some of the time. ;)