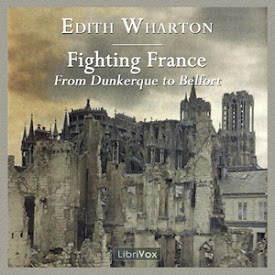 Fighting France, from Dunkerque to Belfort

American novelist Edith Wharton was living in Paris when World War I broke out in 1914. She obtained permission to visit sites behind the lines, including hospitals, ravaged villages, and trenches. Fighting France records her travels along the front in 1914 and 1915, and celebrates the indomitable spirit of the French people. (Summary by Elizabeth Klett) (3 hr 20 min)

<br />American author Edith Wharton, living in Paris at the start of the Great War, was motivated to action. A true humanitarian, she created charities in Paris to house and feed refugees pouring in from Belgium and northern France. She also cared for orphans and provided relief for the growing number of soldiers stricken by tuberculosis ("consumption"). These charities were known as the "Edith Wharton War Charities" and they helped many thousands of people. In 1915, Wharton and Walter Barry took four one-week car trips to the front lines, from Dunkerque in the north, to Belfort in the south. Their car was loaded with food and provisions and, because of her war charity work, the military go-ahead needed to observe the conditions along the front lines up close. She reported some in <i>Scribner's Magazine</i> and collected those plus more into the book under review here, published in 1915. Her reportage made her the first American woman war correspondent in history. <i>Fighting France</i> has been criticized as war propaganda, meant to incite the passions of Americans to become involved in the war. There is some truth to it, Wharton and the French were interested in this goal. In fact she was named Chevalier of the French Legion of Honor in 1916 for her efforts on behalf of the Allies. However it is also a sensitive and artistically rendered accounting of the destruction, a snapshot of life in the trenches and hospitals. [STB | 062010 | 332]

I've now listened to a couple of books about WWI. Diary of a Nursing Sister is just that - a diary of an ordinary someone on the front line in a supporting role. There's a real grit to it, but the author is painting a picture as she chronicles her life. In contrast, Wharton gives little or no information about about how she got to be in a place to observe the scene that she paints. Her focus is on the picture itself. (I learned what I know about Wharton's involvement in the war from stbalbach's post, not from the book.) As a gifted author, the picture she paints is rich with images, colors, textures and depth. Close your eyes and you can see the trenches and the men and the mothers. That she is a Francophile is clear from the start of the book. Understanding how Wharton came to write the book helps to understand her biases as an author. But almost 100 years on, one can set aside the bias and appreciate the underlying events that she described for what they were. Fighting France is one piece of the bigger picture of France and WWI. It is beautifully and well written and is a pleasure to listen to. Elizabeth Klett does an excellent job reading this solo Librivox project. The pace is quick, but the articulation is clear.

Very well read by Elizabeth Klett &. I found it interesting as my Grandpa served in France in the US Army in WWI! I never got to hear his take on it as he passed away when I was 6 yrs old. I am just very interested in all I can find on the war & especially in France for that reason!

The language of a brilliant writer read clearly and precisely describing a personal account of WW1 in France. Quite an example of serious journalism.

An enjoyable description of the 'French' way of approaching the privations of war. Well written and narrated!

Klett reads well. Wharton's story not one of her best.

A beautiful description of France at war