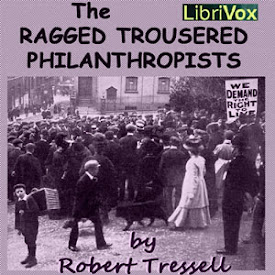 Clearly frustrated at the refusal of his contemporaries to recognise the iniquity of society, Tressell's cast of hypocritical Christians, exploitative capitalists and corrupt councillors provide a backdrop for his main target — the workers who think that a better life is "not for the likes of them". Hence the title of the book; Tressell paints the workers as "philanthropists" who throw themselves into back-breaking work for poverty wages in order to generate profit for their masters.

The hero of the book, Frank Owen, is a socialist who believes that the capitalist system is the real source of the poverty he sees all around him. In vain he tries to convince his fellow workers of his world view, but finds that their education has trained them to distrust their own thoughts and to rely on those of their "betters". Much of the book consists of conversations between Owen and the others, or more often of lectures by Owen in the face of their jeering; this was presumably based on Tressell's own experiences.(Summary by Tadhg) (22 hr 38 min)

Vlands summed up nicely rather repetitive overworked theme but wonderful reading by Tadgh as ever. Still skipping chapters in run on which is annoying. Excellent study of Socialism and as another reviewer stated as relevant today as when written. Thanks for taking the time to bring this to life.

The message in this book is superb, it's just way too long and repeats itself over and over again. Loved some of the characters though and the surnames of the elite ruling classes. You can almost taste the squalor that the poor working classes are forced to endure. My first Librivox download and I have to say I was pleasantly surprised. The guy reading annoyed me a bit at first but I gradually came to enjoy his strong Irish brogue. Sometimes the chapters jump a bit but it's a small price to pay a free audiobook.

A brilliant reading of this story with resounding echos of where we seem to be heading back to now with regards to treatment of workers and the ever increasing gap between those who have and those who have not. Thank you for your efforts in reading this work. It is very much appreciated.

Caveat: the story itself makes one repeated point...repeated and repeated. But maybe that's part of the plan: the monotony and drudgery. However, Tadhg does a masterful narration that brings the characters onto the couch right next to you. He is a Librivox star!

There are two books that every working class household should have: 1. The Bible. 2. The Ragged Trousered Philanthropists.

as true today as its ever been excellent read

Tadhg is a superb reader . As usual i can't reserve my initial comment till fi…

the beginning of chapter 7 . Tadhg reads in a very good Irish brogue , if not dialect at least Irish accent . This one of the great socio-economic criticism novels right up there with writers George Gissing, Elizabeth Cleghorn Gaskell , Charles Dickens , Victor Hugo, Eugene Sue , et al . Even more important is the fact writer of this novel was based on the real life experiences of a working man, house painter and sign painter , who was constantly struggling to care for his daughter and not to end up in the horrible british workhouse , aka poorhouse