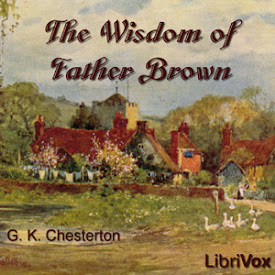 The Wisdom of Father Brown

This is the second of five books of short stories about G. K. Chesterton’s fictional detective, first published in 1914. Father Brown is a short, nondescript Catholic Priest with shapeless clothes and a large umbrella who has an uncanny insight into human evil. His methods, unlike those of his near contemporary Sherlock Holmes, although based on observation of details often unnoticed by others, tended to be intuitive rather than deductive. Although clearly devout, he always emphasizes rationality: despite his religiousness and his belief in God and miracles, he manages to see the perfectly ordinary, natural explanation of the problem. He is a devout, educated and "civilized" clergyman, who is totally familiar with contemporary and secular thought and behavior. His character was thought to be based on Father John O'Connor (1870 - 1952), a parish priest in Bradford, Yorkshire. (Summary by Martin) (7 hr 17 min)

This is what the author was saying, not what the TV show turned them into—which are completely different.

the reader is fantastic and enjoy to listen to. the stories are interesting it's not Sherlock Holmes but it's amusing than the less. it's quite a different style

2018 - this required a lot of patience to listen. Readers voice is so deep and low that I had such a hard time adjusting the volume and treble. Finally, I just gave up. The stories were not as clever as in "the innocent...." but it was witty.

Chapter 1: The Absence of Mr Glass Chapter 2: The Paradise of Thieves Chapter 3: The Duel of Dr Hirsch Chapter 4: The Man in the Passage Chapter 5: The Mistake of the Machine Chapter 6: The Head of Caesar Chapter 7: The Purple Wig Chapter 8: The Perishing of the Pendragons Chapter 9: The God of the Gongs Chapter 10: The Salad of Colonel Cray Chapter 11: The Strange Crime of John Boulnois Chapter 12: The Fairy Tale of Father Brown

Father Brown is one of my favorite characters. I enjoy listening to the stories and watching the series on BBC. Chesterton is unique in his insights and his plots reflect it. The reader is excellent.

The Wisdom of Father Brown

Entertaining and well written detective stories, but Chesterton doesn't give enough clues to the reader to allow a reader/listener to figure out the case on his or her own.

very competently read, and nice to hear a British accent. Reading is occasionally slightly wooden and sometimes could use longer pauses between interlocutors or concepts, but great work, thanks Martin!

The stories are engaging and fun, and the reading is done fine, but the sound dropping in and out is enough to drive somebody bonkers.